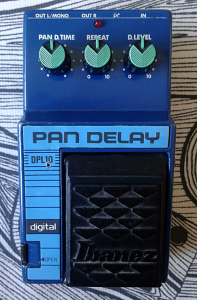 What is it?
Ibanez PDL10 Digital Pan Delay from 10/Power series. Made in japan in late 80’s.

Got this as a defunct unit from one finnish guy i did some deals and trades with. As it was not passing signal, the previous owner had borrowed the stomp lid to another pedal. Gladly, i happened to have one to spare from a defunct (completely dead) DL10 i sourced long ago in a deal of a few pedals that were not in working order. So. To the debugging. The signal died at the input buffer that was a half of 4558 SIP chip. I initially assumed that the chip was dead and it took a while to me to order a few of those in. As those, obviously, are not that common parts to be had lying around (now i do have a few if i ever need them again). As the voltages on that chip pins didn’t look healthy, my assumption was the chip being dead. The rest of the circuit seemed to be in working order, as when i injected the guitar signal to either one of the M50195P digital delay chips, the output was correct. Swapped the 4558 for a new one and nothing. Still the voltages were off by any standards. 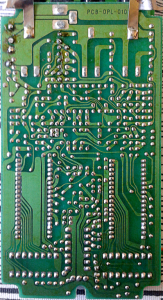 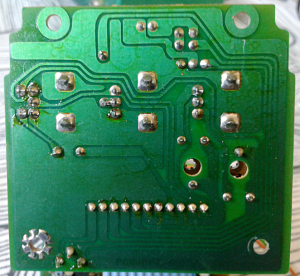 Went on to check more and more and tested the continuity of a few key spots for this netork. Finally i found it. It’s not that common for the 10-series to have two sided circuit boards. Most of the designs are utilizing a single sided board with other side for solder and other for components. This is not the case with PDL10. And when i think it more, this is not the case for any of the more complex boards, mainly delays, in this series. So i finally found the reason for the defect and what was causing it.

At one point, this unit has gotten a jolt from reverse polarity power supply. Due to burnt out parallel polarity protection, the diode has been replaced after the incident. The person who serviced the pedal soldered a new 1N4007 diode in place and since that didn’t fix the pedal, he must have deemed it totally broken. But no, it wans’t totally broken. The issue was that the cathode side of this polarity protection diode acts also as an via, which connects the supply voltage to the other side of the board too. 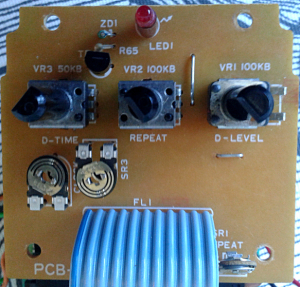 And this via is the spot that takes the supply voltage for the voltage divider of the input buffer’s reference voltage network. And since the diode wasn’t soldered properly on the component side, but only on the solder side, the network wasn’t getting its supply voltage. I then reflowed the solder around the diode and boom. Working PDL10. 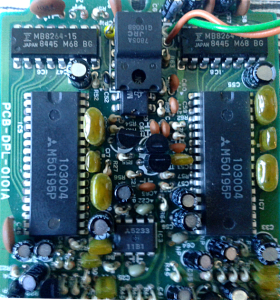 Repairing this unit was a great challenge and i’m more than happy that i could do it. This Pan Delay is already enjoying a “rare” status and the prices are what you would expect from a rare mid-80’s Ibanez pedal. The design is pretty cool, but since it is what it is, a hit it was not. Sure. One can use this in a similar manner than the DL10, which has the same digital delay line inside, but in that case, 50% of the effect is unused. Pan delay in this case means that there are two delay lines constantly out of sync with each other. The input signal is splitted to both lines’ input and the outputs are separate. Meaning that the outputs are meant to be used for stereo. This way the other delay line pumps its repeats in one phase to to the left output and the other pumps its repeats, out of sync, to the right output. And this creates our ping-pong style panning delay.

Not that many panning, or ping-pong delays out there. And at least to me, the reason is pretty simple. Most of us use out pedals with guitars. Guitars tend to have one output and amps tend to have one input. So the stereo use is best to leave with studio experiments.

Either way. It is a beautiful unit with crowded board and neat board design. Definitely a one trick pony, but a rare specimen of this particular trick. Amazing unit to have.

How does it sound?
Good. It can be used as a single delay line, and in that scenario it doesn’t differ much from the sleek and smooth hi-fi digital delay tones of the DL10. Actually is sounds exactly the same. I think one could achieve the same sounding effect by splitting a signal for two DL10s and somehow creating a separate sync for those. It is clean and nice sounding delay with nothing too special in its tone. The ping-pong output is the speciality on this one. Great unit for studio work.