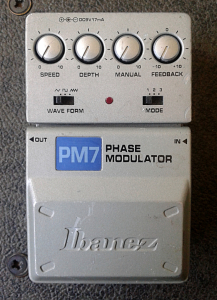 What is it?
Ibanez PM7 Phase Modulator from 7/Tonelok series. Made in china, 2005

As the truly modern guitar effects go, there are usually those that designers have spent hours to design an effect that sounds great on guitar. Better than the previous takes on this same subject. Then there are these designs that try to create something completely new and something that’s never heard before. These two imaginative design methods rarely combine well. That said, the Maxon engineers behind the PM7 Phase Modulator have reached a line that’s not often crossed. The controls are loaned from flanger designs and the versatility of Speed, Depth, Manual, Feedback and three LFO waveform modes, in addition to four/six stage switch and two in/out of phase modes for the 6-staged phase, is just more than convincing. Manual can be seen at Midimanuals. 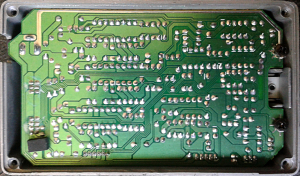 Everything is still through hole construction on five board system that is familiar from all the other effects in this series. No surprises in build quality or component selection. The phase utilizes three dual 13600 OTA chips. SO every phasing stage has it’s own half of the chip. 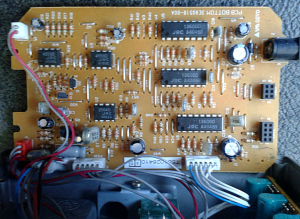 Buffering and mixing is done with obvious Ibanez/Maxon weapon of choice, the 4558. LFO is created with NJM2904D. I’m guessing that the choice for this chip as LFO has been made due it’s stability in case of taking more wobble out of the LFO than what we usually see in any, or at least most, LFO controlled circuits. 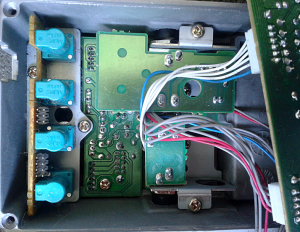 Solid construction and designed to withstand a hit. Thick metal housing for everything electronic that is fastened with screws. Nothing floating or other wonky in there. These will be able to take years and years of abuse on the road.

How does it sound?
From mild sweeps that remind us a little of the original MXR Phase90 to absolute noise madness that can be described better with a word monster pseudo-ring-modulator. Well, this is to be expected. If one takes out a 6-stage OTA-based phaser and equips it with more feature packed LFO than most design have, this is what you’ll get. The palette is very versatile and the sounds range from mild to extreme, while still hanging on to term usable. Overall, this is a very good pedal.