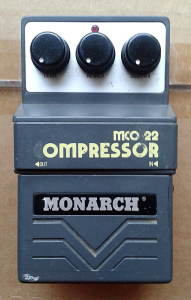 What is it?
Monarch MCO-22 Compressor. Made in japan around mid to late 80’s.

Got this one in a trade. Could have bought it straight off, since the price was right. There is always something interesting in these 80’s japanese cheapos. Mainly because most of them are really good sounding and usable circuits, despite their cheap and lousy plastic overall feel. A little research pointed out that Monarch was a brand that was basically just OEM’d catalogue of Aria effect pedals. And as such, this pedal is exactly the same unit as Aria ACP-1 Compressor. This particular unit has seen some use too. The knobs are not original, but for a unit that’s seen use this isn’t a surprise. Well. At least the plastic battery compartment cover is in its place. Of course i then needed to know what the electronic design held in store, so i opened it up. Typical japanese board design with pleasing looks and a mark of hand crafted trace design. 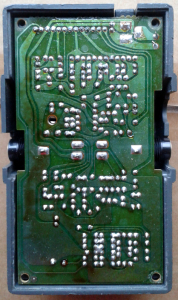 By testing and looking at everything else, i was pretty sure the design is the standard OTA-based compressor like so many others in the genre and from the era. The stacked control board only houses the pots and and the indicator LED. No other parts of the circuit extent to the control board. The image below shows the component side and its layout. The switch (which someone has repaired with a piece of non-slip tape) and the electronic switching components are at the bottom. The diodes are for actual switching transistors that are grouped between the switching and jacks. So the effect circuit itself is placed above the jacks. 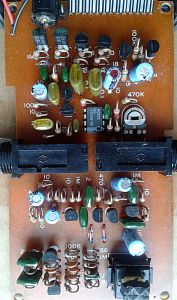 And the circuit is nothing else but a 3080 OTA-based compressor/sustainer. A quick search on the susbject showed up a DIYStompboxes forum thread where good folks were sorting out issues with a Rocktron Big Crush pedal. As Analogguru states on that thread – “Funny to see the schematic of the Aria ACP-1 (and similar units) in a Rocktron pedal.” So let’s take a peek at the Big Crush schematic that user jwbink1500 has uploaded. There are some similarities with the standard Dyna/Ross compressor, but the trigger part differs to a degree. According to Analogguru, the main difference between a Rocktron and Aria/Monarch compressor is the value of one resistor. Which he believes is an error that came to be in the cloning process. Nice design. And what’s more important…

How does it sound?
This actually sounds better than many modernized versions of the OTA compressor. The controls have good usable range and and the mushiness isn’t an issue. For the attack control, the feel is a lot better than for many similar designs. Despite its overall plastic feel, the sounds are very good. This was an interesting find and i’m actually very happy with the unit. Even if it doesn’t have the original push-on knobs in place.