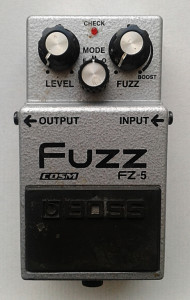 Since we are on a roll with sounds coming out of digital circuitry, here’s one to add. Some may have wondered why there isn’t a schematic or any hint of a DIY project for a pedal with this reputation. The answer is simple. The code inside the pedal is the thing that makes up the effect. The electronic circuitry is once more nothing else but input buffer -> electronic switching -> A/D conversion -> digital signal processor -> D/A conversion -> electronic switching -> output buffer. There is a Boss branded signal processor that takes care of creating “that vintage up octave sounds”. Sure. The idea of having a Fuzz Face, Maestro FZ-1 Fuzz Tone and an Octavia in a single box is not that bad. Actually i’d call it very tempting. 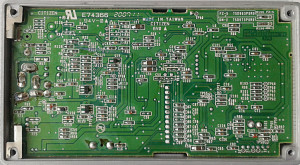 But there is a “but”. The label on the cover says “COSM”, so at least the digital design isn’t being covered or pushed aside like it wasn’t there. I’m not sure when digital stopped being a selling point in pedals. In the 80’s and early 90’s it was respected to have everything digital. To be honest, i’m not sure if i’m ever going to get interested in DSP. The DSP is very useful and can do great things. For example, think of all the reverb units around. And what about those multi effects that are nothing short of great for bedroom practice sessions. Here’s the “but”. We are talking about digitally modeling three circuits that would have been doable with cheaper set of components as an analog unit. To me, this seems like one of the in-house competitions Boss engineers might have had. Say, who can turn three simple, a few transistor circuits into a current hogging digital design?

These three modeled circuits have been classics for decades and for a reason. The different transistors in Fuzz Face (and same goes for the rest of the trio..) make a noticeable difference and there have been several main versions over the years, since late 1960’s. Nevertheless, these classic effects have their status due to driving the semiconductors to the point where they shouldn’t be driven. What boss did, was to model these digitally and put it on the market. And then there are the results…

How does it sound?
Fz-5 isn’t the worst sounding pedal in Boss catalog. Hell, it isn’t even their worst sounding fuzz. But it is like playing chess with a friend on Nintendo. The three modes are surprisingly close to their idols, but still not close enough. The main difference with vintage analog circuits is the “unreliability”. The one factor that makes a Fuzz Face what it is. Even the best digital modeling can’t calculate the semiconductor behavior close enough to reality. Maybe in decade or two, but not yet. These modelers are not that bad sounding things and someone who’s not married to the analog electronics won’t be able to tell a difference. To sum it up, the pedal offers “close enough” models of three widely used and recognized fuzz circuits. For garage punk guitarists, this is not an option. But for those who want to use a little of fuzz in their home recordings, why not. The fuzzes from this box are a lot better than the ones on most multi effect units of the era. At the same time, it is good and it is bad.