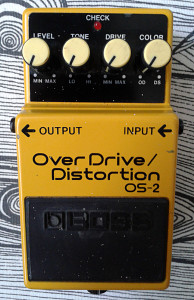 What is it?
Boss OS-2 OverDrive/Distortion. Made in taiwan, january 1996.

I was rather keen on trying this one out. I find the idea of OD and Dist made blendable in a single unit intriguing. This, among with other basic or classic hits as DS-1 and SD-1 are probably the cheapest and most common boss pedals around (sure the number of Metal Zones sold may top everything, but still..), so the money spent versus the fun had was nicely in balance. Before digging any deeper, let’s take a look at the board. 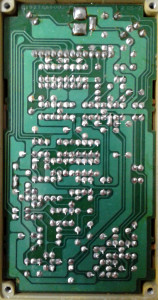 Just as one would expect from a boss pedal that was released in 1990. All the japanese hand craft pointers are already gone and CAD software with auto-routing feature has been in use. Nothing even resembling a visual beauty has not been a part of the board designing process (yes, you can argue that it doesn’t have to be as much as you want).  So no matter what way we look at this, it is just dull looking, but well functioning board. There would have been room on the board to place things differently, but why bother. It’s not like anyone else than some pedal freak/enthusiast will ever be looking at the board from a visual perspective. But let’s look forward. There’s a traced schematic up at FIS. This is where things get a lot more interesting. 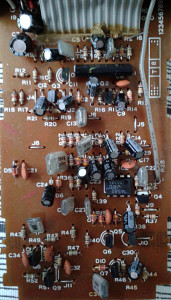 The switching and input buffering are per most analog Boss boxes, so nothing of interest in there. After the input buffer the incoming signal is split in two ways. The upper part in the FIS schematic resembles a ProCo Rat with its dual high pass filters and hard clipping. The WTF points go to post clipping filtering. After this filter network, that sort of mimics the filter control on Rats, there’s an buffer stage, followed by a mixer amp that takes care of the mode mixing with a pot called “color”. But we’ll need to back up a bit. The second path from the input buffering was sent to an overdrive stage. This stage isn’t a lot different from SD-1 clipping amp with its asymmetrical clipping diodes in the feedback loop. There is more gain coming out of it and the high pass filter is set lower than in Tubescreamers or Super OverDrives. The output of this clipping amp is then fed to the other side the color pot. The gain setting is the most peculiar thing in this design. It’s a dual (or as some folks like to call it – a stereo) pot with value of 270K that sets the feedback resistor for both sides simultaneously. Rest is just the tone control not completely unlike the one in SD-1 and the output buffering.

So yes. There is some effort in the design. I’d even go to lengths to call some parts of it interesting. Simple, but convincing. Nice design in a cheap package. But then comes the issue.

How does it sound?
Not that great. If we start with the OD side of the color pot, the biggest thing that the sound does is raise eyebrows. Maybe even shoulders. It mid honks its way to the drive-in and leaves you with warm cup of soda and cold fries. But the distortion side of the color pot is the burger. Double cheesed and not bad at all. It sure does remind me of a Rat, but not to the degree where it would be “something alike”. Nope. It’s sleeker in its tone and does not go as mushy. Not a Rat, but not a DS-1 either. Good sounding distortion that goes closer to DS-2 Turbo Distortion range. So overall sound of the pedal isn’t too impressive. But it isn’t bad. These do come cheap, so you might as well get one. Hope you like your soda warm, fries cold and burger delicious.