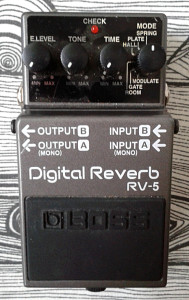 So the Boss RV-reverb line keeps getting duller as it goes further. Can’t help but to compare this to RV-2, which was ground breaking pedal in many ways. First off, the RV-2 was the first compact digital reverb ever produced. Second, the design had some real ingenuity in it. RV-2 has gained its status with its impressive, hard work from the design department, while making things that previously were impossible, possible. Sure it was costly effect to produce. So it was replaced with RV-3, which offered more options by having delay settings. Delays are just simplified reverbs without the vast number of stacked repeats, so adding delay modes wasn’t too big of a deal. It did add to versatility a lot, but while it gained high number of supporters, it still couldn’t touch the original RV-2’s status. Apparently RV-3 got too expensive to manufacture as well and it got replaced by RV-5 in 2002. RV-5 was apparent attempt to recreate the feel of original RV-2, instead of clinging on to multi effect-like feel that was the thing with RV-3.

Opening the box up shows a side of the board that makes me wonder if they were attempting a Guinness world record for number of vias on a compact pedal with a single PCB. 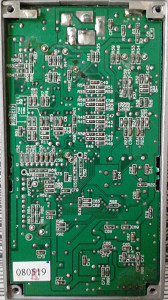 The other side shows couple of dual opamps for buffering and mixing, but the effect itself is just a Boss branded DSP chip. Also note the two crystal clocks. Even though this looks like an elaborate and neat design, the same DSP is circulating for other Boss effects too. Which means that the pedal is pretty much the same as twenty or more other pedals in the series.  Only the code for the DSP is different. The thing that gives me the only real feeling about the board is the “Cheer Time” text on the silk screen layer of the PCB. 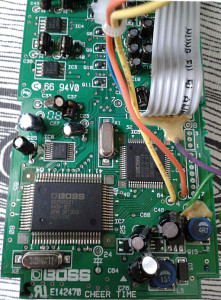 As the features go, there are six modes of reverb, including digital modelling of spring, plate, hall, gate and room reverbs. Sixth mode is “modulate” which adds a sort of  chorusey feel to the reverb. Other controls are E. Level, which mixes the clean signal with processed one. Tone, which can be used to cut some highs so user can try to mimic more vintage sounding units. And finally Time, which sets the decay time for each mode. This unit is also built for stereo in and out, so it has more uses on the studio desk than many others that are simply meant to be run with a guitar.

The frequencies are kept well in tact, so this reverb works quite well with all the instruments. We could call it full range device. Not sure if that is too official term, but since it’s not cutting your lows or highs to audible degree..

How does it sound?
Like all Hi-Fi digital reverbs. Even though it gets the job done with flying colors, the amount of lacking personality and individualism is higher than on most tasteless and scentless sounding pedals. All the way to the degree where i would go so far and call it boring. While it is one of the most boring guitar reverbs i’ve ever played with, it’s not that bad. Where the digital design was still rocking in its cradle when the RV-2 was released, that also meant that the deficiencies in that unit turned out to be the strong parts. RV-2 is not a supr dull Hi-Fi device, but great reverberator for folks who want to sound like themselves by adding certain rough edge to their sound. RV-5 does not give you any edge. It works as a reverb and it works well. It has no personality and it has no edge. But it works. In reality, this unit will serve a lot better as a vocal reverb used in the inserts of a mixing console than what it can do with a guitar.