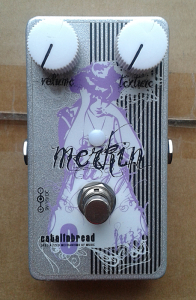 What is it?
Catalinbread Merkin Fuzz. Made in USA in 2010.

One of the first more “boutique” pedals i sourced and deemed as a keeper. Before getting  the unit, i had already played around with the circuit as the traced schematic has been floating around for years. You should be able to find at DIY forums. Due to this, there wasn’t anything completely new to me when i first fired this original up. When this unit reached me it had its LED burned out and i swapped it for a new one back then. Sad thing is that i didn’t snap any photos then. Call it laziness, but i just didn’t find the enthusiasm to open it all the way again for this article. If we start by looking at the guts, we’ll see two sided board that is looking very professional, but at the same time, rather dull.

Sometimes it’s great to find that circuits that have very little to do with each other on the topology have similar sounds coming out of them. I’m certain that some people thought this to be just modernized and treble cut Mosrite Fuzzrite due to it’s spongy, wild sounds. But designwise this isn’t even relatively close to Fuzzrite. In general, there are three transistor stages, which all take every single bit of gain out of their semiconductors. The texture pot is mixing the output of first and second stage, which is then pushed to the third stage. Somehow this arrangement reminds me more of the Baldwin-Burns Buzzaround, while still being nothing too close. In other words, the circuit design is pretty cool and has some out of the box thinking in it. Sure, there isn’t anything completely profound and anyone with deep experience and understanding in fuzzes could have created something that takes bits and pieces from the Fuzzrite and Buzzaround to combine them in a modern circuit. I’m not sure if this is the case. But if this design is created on a breadboard without following the two schematics mentioned, i’ll take my hat off and raise my glass.

Catalinbread is one of the companies that have grown from single person boutique operation to respectable scale and very respected reputation. There is a reason for this. First off, they know where they are coming from. Second, the quality. Professional and modern boards which are then hand crafted. Boards may look dull, but all the joints look like person with the iron has a real interest in the finished product. Next Catalinbread pedal i’m getting may very well be a new one.

How does it sound?
Ingenious. From that “satisfaction” to killer mushroom clouds. There is definitely that vintage sputter in the tone and texture maxed will give you massive single note lead tones that will work great on those doom/stoner leads too. While the two-knob configuration is the way to go with vintage-like fuzzes, there are tons of different sounds. The pedals reacts to guitar’s volume knob as a gain, and the guitar tone can be used to transform the sound. You’ll get up octaves and down octavish craziness in there too. Not to the degree of MXR Bluebox, of course, but still the overtones are something quite different from Fuzzrites and derivatives. If i had to describe this pedal with a one word. The word would be a “keeper”. Sure. It may not fit to everyone’s taste as it is quite wild. But to me. A keeper.