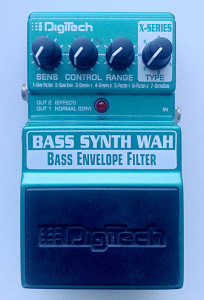 What is it?
Digitech XBW Bass Synth Wah, Bass envelope filter from X-series. Made in china around mid-00’s.

Ok. I’ve had some of the X-series boxes lying around for quite some time. Just didn’t find it in me to open them up until now. All them sounded and felt reasonable good on initial tests, so i just took the stance of “decent, not great, but decent” and left them be. Now i figured i would finally start checking them through. XBW is a good unit to start with. Good features and there is some notable usability in there. Sure this isn’t meant to compete with Boss SYB-3/SYB-5 with its lower price point and slightly smaller feature set. I haven’t seen schematics for any of the X-series boxes around. Opening the bottom plate gives a clue for why. There are vias like drops in the ocean. 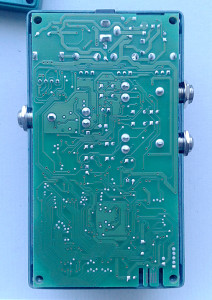 For starters, super dull, auto-routed board design is quite off-putting. Next, the brand is called Digitech. Which made me slightly cautious and suspicious, since the Distortion series is all analog and has roots deep in the old DOD catalogue. Flipping the board over shows what’s really going on. Harman (the mother company of Digitech) branded AudioDNA digital signal processor with crystal oscillator and a ROM. Now this is what the digital effects are made of. Don’t have to see the schematic to tell you that there is analog signal path with buffers ann switching, followed by AD/DA conversion and another set of buffers and switching components. The effect is in the slash between AD/DA. 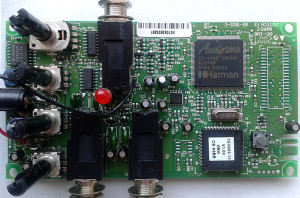 This made me worry a little. Could it be that Digitech X-series is as boring designwise as post-2005 Boss pedals? This meaning that the circuitry is exactly the same on all boxes, just with different digital control for each and different code in the ROM chips. Nothing too wrong with that. It’s just that my interest about the X-series boxes just got stomped even deeper in to the ground.

How does it sound?
Like a working “bass synthesizer” pedal. To get a picture, we need to compare it to something we already know. Boss SYB-3 is well more feature packed and wilder in its sounds. Same thing goes for Ibanez SB7. I’d say the synth sweeps here are duller than the competition, but there isn’t that much negative to the sound. More boring than the competition, but still a decent entry level bass synth/autowah unit. For the price and your home recording applications – i’d say this will suffice. Works and sounds pretty good on guitar too. Leaves me baffled, but still trusting.