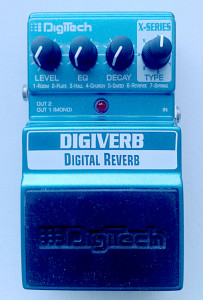 What is it?
Digitech XDV Digiverb from X-series. Made in china around mid-00’s.

Hmm. Something familiar? Digitech X-series doesn’t fail to disappoint. At the top of the price list for the series, the reverb and the delay are usable units with decent set of features. Actually, these units take on Boss and other mass produced units for a tight match while still being a lot lower on the price tag. But here’s the thing. While other big brands have designed their units from ground up, solely for the purpose they serve, the Digitech units are, well. Digitech units. Once we open up the bottom plate we’ll see what’s going on. Yup. The board is the same we saw on previous X-series posts.

And it doesn’t change once we flip the board over. The circuit is the same, with inclusion of that ISSI-chip which isn’t present on most units. But the rest of the layout and electronic design is the same.  I just noticed the cutouts on the bottom right. If you look closely, you’ll see the connctors there. That must be a connection that reminds me of PCI connections found in computers. I’m fairly certain that is used to send in the data to determine which effect the pedals will be. So in general, the effect is made with AudioDNA DSP, an Atmel chip and an ISSI-chip. 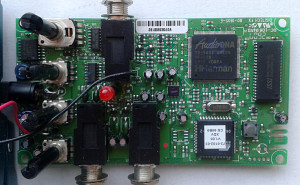 I said earlier that the effect is feature packed. It is. With mix control to dime in the desired wet/dry level, EQ control to set the amount of highs and decay time control, the these three would offer decent basic setup for any reverb. But then we have seven modes that all have their own reverb tone. The modes are like straight from your standard rack mount reverb units, room, plate, hall, church, gated, reverse and spring. I’d call that a decent set of features. And these modes do resemble what they are trying to model. Quite well too.

How does it sound?
Not bad. Like any pristine sounding rack mount reverb in a small form factor. And since you can get these used for reasonable prices, the bang for buck ratio is very nice indeed. The quality of the tone is also on par with the rack mount units. And thus, the lack of personality and notable level of boringness steps in. Works fine and sounds decent. Usable for your home recordings. This could even be used as a master reverb through mixer send/return loops. I doubt that many would notice any tonal difference between this unit and any low to mid priced Lexicon rack unit. Good sounds in from a boring digital circuit. You bet the article for XDD Digidelay will be shorter than this. After all these two are in fact the same pedal with different code burned in them.