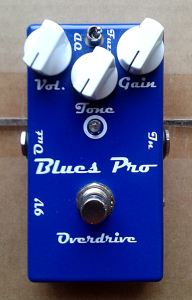 Smaller brands with good reputation in the tweaker community? The vast number of brands vs. the reputation leave quite a few out of the equation. There are these smaller brands that may have had one of theirs as a flavour of the month on certain guitar forums. Usually when that happens, the hype lasts just as long as someone finally opens the unit up and finds the circuit to be nothing more but a tweaked tubescreamer with questionable build quality. Mostly for that reason some of those new and exciting brands seem to vanish as fast as they appeared. But MI Audio has kept its status. And mostly for a reason. Decent build quality on all units and noticeable amount of effort to stand out with the tones. Not to mention the well developed sense of humour. I’ll admit that my first reaction was a wide smile when i opened this unit up. 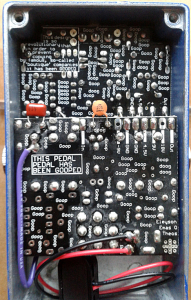 I think i don’t need to say anything more. The gut shot tells you everything you need to know. If i was to say something negative about the build, the excessive flux residue makes me think the unit was put together in a hurry. Plus i’ve never been a fan of board mounted DC jack that is simply placed behind a hole in the box. That seems just a little cheap. But that’s all of the downs i can think of. Everything else is pretty solid. My guess is that the circuit is pretty much the same as for previous versions of the Blues Pro.

We have out basic three knob arrangement with Volume, Tone and Gain. The toggle switches between “OD” and “Fuzz” modes. Which both are still a lot more overdrivish tones than anything resembling a fuzz. I’d rather call those modes “standard OD” and “Slightly Fuzzier OD”. That’ll give a better idea what to expect.

How does it sound?
Open, semi-transparent mid-gain overdrive. Clear as summer sky. Clipping textures for both modes sound open and whole without compressing too much. I felt there was something familiar about this tone, so i A/B’d this with Barber LTD Silver. There are a lot of similar points for these two, mainly the openness and transparency. Both are miles away from any current mass produced big brand pedals. In a good way. I do prefer these types of clear boutique-like tone way over the tasteless big brand stuff, although MI Audio isn’t that small brand and hasn’t been for years. Good all-around overdrive pedal. Possibly not the greatest choice for soaring lead work, but as an overdrive, very good.

Australia is pretty far away from here, but i’m hoping to be able to try out their amplifiers some time in the future.