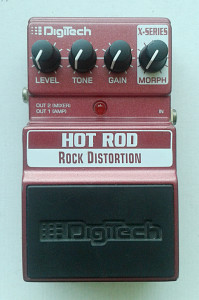 What is it?
Digitech XHR Hot Rod Rock Distortion from X-series. Made in china around mid 00’s.

It says Rock Distortion on the top. What to expect from its tone wasn’t anything short of obvious. But. The disappointments of shared digital board designs for the several other units of the series made me rather weary about what to expect designwise. Once the bottom plate was off, the sight was nothing close to those autowahs and reverb/delays. By the looks of the board it already looked like a digital design, but there’s no easy connection for the code burning anywhere. Just the 14 pads with nothing soldered to them. 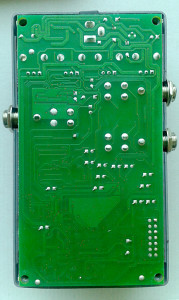 So the board differs from modulation and echo effects from the series. Instead of Harman branded AudioDNA DSP chip, there is Texas Instruments processor accompanied by a oscillator crystal. Nevertheless, the design is all digital, except for the buffering and switching. Same as, well. All the digital effects. 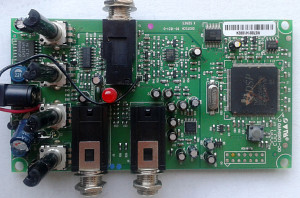 For controls we have Level, Tone and Gain. But in addition to those standard controls we also have the “Morph” knob. While level/tone/gain are pretty self-explanatory, the morph isn’t. It’s sort of like scoop, depth and texture controls combined in one knob. Very effective and it discusses nicely with all the other controls. In essence, the morph adds a lot of variation to the pedal.

How does it sound?
From Marshallesque, fat OD/Dist to scooped near-metal distortion. And everything in between. Versatile and the digital code isn’t bad. The effect does not add emphasis on anything that sounds broken. Many digital distortions set the emphasis on modelling one feature of the tone the designer/programmer is after, resulting in useless one trick pony that does nothing more but walks on a pink tight rope. The biggest caveat comes from completely foreseeable behaviour. Meaning that drops in voltage or changes in guitar controls does not affect anything. At least not to the same digree we see and hear on analog designs. At worst, the tone is Ibanez MF5 resurrected as a Robocop. It’s not all bad, but it still is a Robocop. At best this shines as a squeeky clean, modern, solid distortion tone. Not clean as in “not-distorted”, but clean as is in “you won’t hear the shit storm inside the tone”. Or in other words, the overtones are just foreseeable.

Still. For the price, very decent digital rock distortion. Nothing you can’t get out of your Line 6 Pod 2.0, but still.