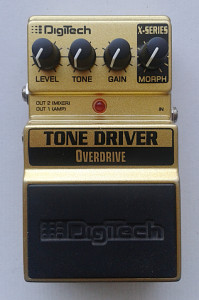 What is it?
Digitech XTD Tone Driver Overdrive from X-series. Made in china around late 00’s.

Usable and quite frankly, decent sounding cheaper drive pedals are pretty common nowadays. This is one of those that you can score as used for peanuts. Or next to peanuts at least. Got the unit for cheap and after trying it out, i wanted to see what was inside. Screwed the bottom plate off and first thing to jump out was the PCI-style connection on the lower corner. No doubt about it. The circuit shares the same base with all the other X-series pedals with a pot as the right hand side knob instead of a switch. 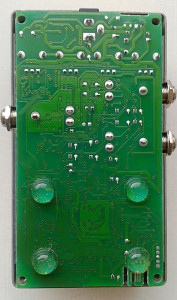 As far as i can see, the board design is exactly the same as for the other driver pedals in the series. Only things that differ are the code inside, colour of the box and the printing on it. 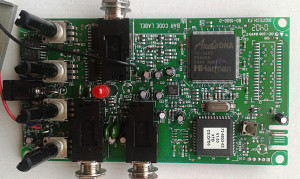 We got our basic controls with volume, tone and gain. And the Digitech exclusive, the “Morph” which acts like a voicing control. Morph shifts the overall frequencysort of like a wah or parametric EQ would do. In essence the unit is pretty much digital equivalent of D-series Bad Monkey or Screaming Blues. Meaning that the D-series pedals act like analog effects do, while this one here…

How does it sound?
The first impression on the tone was pretty pleasing. But after a few short minutes i noticed the overtones had a pattern that just didn’t feel right. That was of course due to digital nature of the unit, making the tone just slightly duller than what we find in the most generic and dull Boss effects. I’m not deeming this unusable. Mainly because it’s not. It is quite boring without scent or taste, but it gets the job done. If the job is to slightly boost your tone, then you can’t go too wrong with this cheapo. Will this ever see much use in my possession? No. Like for all the drivers in this series, there is nothing you can’t get out of your post 2002 digital multieffect. For fusion jazz player, this is recommended unit. Use it for fusion jazz, and i don’t have to listen to its tone. Works and sounds decent, but not great in any way.