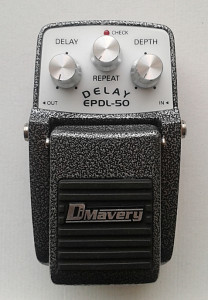 I was on the hunt for the original Daphon branded E20DL as it’s apparently the same circuit as for Daphon E10AD. The reason for hunting down a low end brand’s delay unit? The schematic for E10AD on Dirk Hendrik’s archives suggest that the design is actually very close to certain Maxon developed analog delays. And since this chinese manufacturer was responsible for producing the plastic Ibanez soundtanks, my interest raised too high to resist getting one. Daphon branded units are pretty scarce here in europe, so i just couldn’t find one. What i did find was a DiMavery branded version of the E20DL from a german retailer. And the price was decent enough too. The shipping cost wasn’t cheap, but that’s mainly due to the unit weighting a ton. Once the parcel arrived, it was time for a test run and to see how the unit was made. First thing that caught my eye was the horrid “quick fix” (TM) on the boards dc jack side. As the number of solder joints shows, there will be a lot of components in there. 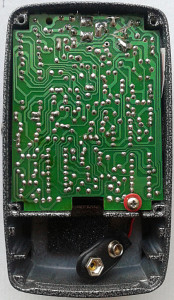 And there are. Most of the board design looks a lot like the ones we see in every Soundtank. So everything’s in order so far. The DDB is modern BL3208, a 2048-step BBD. The noise content for the delay line is tamed with a compander. In all, pretty straightforward analog design in a box that’s way sturdier than most others. Weighting in at about 700 grams, the box is definitely one of the sturdiest of all. 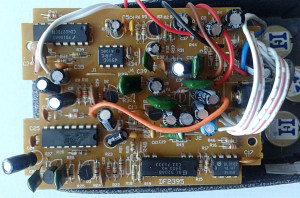 The enclosure may be great, but. What comes to build quality, i’m not too impressed. Insides are made with cheapest parts available, and while the workmanship beats most Danelectro mini series units, it’s still sub-par when compared to Ibanez Soundtanks. Which is pretty odd, since we are talking about the same factory. Maybe the profit margin for current OEM’d boxes is less than what it was with Ibanez. Either way. This represents the cheapest metal housed analog delay in existence. Sad thing, but low price point doesn’t usually add up to high quality. And. I’m afraid there’s more.

How does it sound?
If we start by playing around with slap back type delay times, set the feedback accordingly and dial the mix to suitable levels. Then, this is very nice effect with smooth and soft analog feel to its tone. I’d estimate the maximum delay time to be something like 300ms. But there’s an issue. If and when the delay time is set above half turn, there is distinct higher frequency distortion present. My guess is that this is due to slightly misbiased BBD. And since the board doesn’t have a trimmer, this can’t be remedied simply with a screwdriver. So as it is, the short delay times work well and sound good. Longer times are next to unusable. I bet this could be modded to work better, but i haven’t found it in me to do so. Maybe some day. On the other hand, the distortion on long times in addition to self-oscillating feedbacks do make this very reasonable and cheap analog delay unit for all you noise heads. Looking for a hifi analog delay? Look somewhere else.