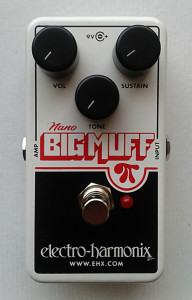 Ok. This took them long enough. The massive Big Muff enclosure is sort of an visual trade mark for this obviously classic fuzz/distortion, but there’s been Little Big Muff out for a long time. Little BMP being the same circuit, but just in a 1590BB-sized box and with mostly SMD construction. We all know the circuit doesn’t require the huge box, even with through hole parts since dozens of other brands and boutiquers have been offering their tweaked clones ages. And usually in a smaller, 1590B, or 125B sized enclosure. In my opinion, the size form factor does matter to a degree. B-box always trumps the bigger ones (but if we go smaller than that, my interest drops lower than hell). So, in a sense, EHX releasing a BMP in a smaller form was just a matter of time. Chinese cloners are currently selling similar circuits in A-sized boxes, but i do hope that EHX doesn’t go there. Ever. 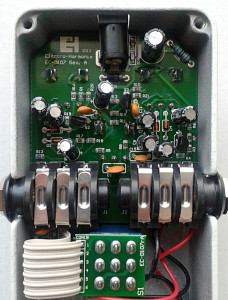 Looking at the circuit and checking out the treasure cove for BMP information, The KitRae’s Big Muff Page, the design for this one is the same as for current huge box reissue and Little BMP. Our basic four gain stage design with the middle ones having diodes for clipping. Exactly like all the other discrete semiconductor BMP versions. Circuit is actually very close to Little BMP with through hole transistors, diodes and a few key capacitors. And since this is electronically the same as current ones in bigger boxes…

How does it sound?
It sounds exactly like the others. Big and creamy with decent output levels. As with all BMPs, the  sound is at its greatest with clean amps and medium to low output pickups. The design and the sound it represents has endured time extremely well. There have been some changes in the design over the decades with all of them having a lot in common, while still sounding different. This and all the others post-2000 units sound more or less the same. With a few exceptions. Still, no surprises. Just the classic tones in a extremely usable format.