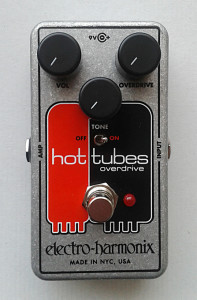 Some time ago i stumbled on to a schematic of this CD4049 hex inverter based OD/Dist unit. Played around with the design and noticed it had some real potential. There are numerous drive designs with hex inverters on the wild and while the CD4049 distortion is quite distinct in its tone, most of the circuits still have their own kind of face. Since i had played around with the old version of the circuit and loved it, i had no choice but to get the modern original. Rare occasion, but since the new EHX nanos are priced very reasonably, i got this one as a new unit. For all you DIY’ers out there – get the original. It will be cheaper than building your own from the schematic. 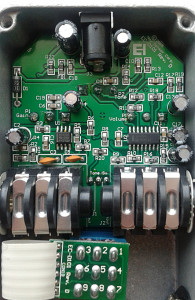 Quick eyeballin’ of the board shows that the circuit is the same as for the old, big boxed Hot Tubes units, just executed with SMD components. Everything from board design to the box scream “EHX” from miles away. Nothing special in the insides. There is a schematic up at Gauss Markov’s site. Plus a documentation for you to build your own. Like i said above, it may not be economically viable, but still. If we recap the design, there is JRC4558 after the input. Both channels of this chip are used to drive the first gain stage of the hex inverter. The gain of the design is set by simply placing a variable resistor between the dual opamp output and the first inverter input. This is followed by a second stage and next up is the switch for bypassing the tone stack. Both option outputs are driven by hex inverter stages, which means we have two of the inverters not in use. The tone control itself is pretty close to the variable high pass/low pass filter we see in all the Big Muffs and derivatives. It’s always a pleasure to look at an electronic design that makes sense.

How does it sound?
Vintage-like. Not too trebly in any way, but focusing on the lower frequencies for the overtones. It does sound very powerful. From mild boost to soaring distortion. I think some of the bass players will enjoy this more than average guitarist due to its relatively dark tone. Like stated, the tone focuses on lower frequencies, but i find this very usable nevertheless. The tone bypass is a novel idea too and will add to already high usability. Very good sounding unit. And since these come cheap, i can’t help myself but to recommend it to you all. It may not suit to everyone’s taste for a main overdrive, but it will have its use.