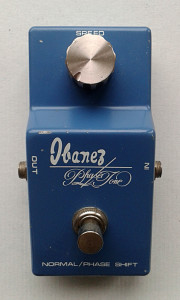 These units apparently are not as rare as i thought. I suspect that the number manufactured was very high as there seems to be several units available in shops and auction sites even right now. Apparently the units sold very well back in the day. I had a hunch i was not going to buy one of these, since the prices around were looking quite ridiculous. Ranging from around 200 to nearly 500 euros. But, as it turned out, someone had one in a very condition and was willing to pass it over to me with reasonable price tag. The unit was and is in very good, slightly used condition with only small chip on the side panel.  Apparently someone has made it to squeeze the battery snap adapter for the power supply.. This is shown in the photo.

The board is fixed inside a plastic container. Since there is nothing wrong with my unit, i didn’t feel like forcing it open. What comes to electronic design, we have quite standard four stage JFET-based phaser. Dirk Hendrik has a schematic up on his site. The schematic shows a modern Maxon reissue, but i’m pretty sure the main circuit is the same. I’m sure that these originals from mid-70’s did not have dc jacks or indicator LEDs in them coming out of the factory at all. No other surprises, but overall feel is still stronger and prettier than what we find in similar designs. And then for the most important part.

How does it sound?
Amazing. Great soft analog feel that doesn’t spoil the tone of your guitar. While there are similarities with MXR Phase 90, the sound here is just better. Well balanced depth and sufficient speed control are basically everything that you would need. Additional dc jack and more modern switching could be in order, but those do not affect the tone. Which is just sweet as honey. Praised classic and for a good reason. Recommended phaser.