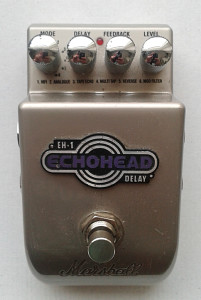 What is it?
Marshall EH-1 Ehcohead delay/echo. Made in china around early 00’s.

My relationship with these effects isn’t anything too special. I just simply like them for their heavy construction and fine tones. Most of the units in this series (which i like to call “small metal series”) are relatively low on their price point and most of the designs are still available as new in 2015. I’ve already been inside a few boxes and may have pointed out that the chinese factory that manufactures these for one of the UK’s coolest brands may be the same shop that is responsible for Ibanez 7-series. At least the board manufacturing methods and and component placing do suggest that. I have absolutely zero evidence to back me up on this. It’s just a gut feeling. As it is a gut feeling to like these units. Well. A small form factor, good tones and box design that will be able to take a hit on a road.

To begin with this delay/echo unit, opening the bottom plate shows a board that reeks of digital design. This was to be expected. There is no way the design could have been analog with the set of features we have on the pedal. 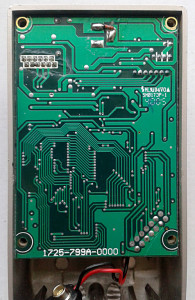 The electronic design itself is rather complex. We have our Texas Instruments DSP chip, plus Atmel and BSI controllers. The motherboard is taking care of the AD/DA conversion and the effect itself, while the switching, buffering and mixing is handled on the second board. 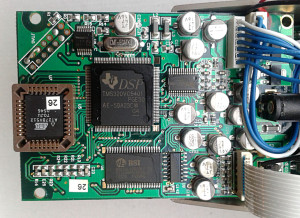 With current, limited understanding of digital design, i have to leave with these photos and a notion that if someone wants to design a digital effect with SMD components, it surely should look something like this. In my opinion, at least. 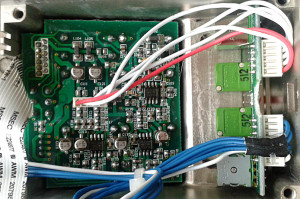 But what about features? I said above that the amount of features made me think digital in the first place. For the connections, we have mono input  with stereo output and a jack for external momentary tap tempo switch.  In addition to DC jack, of course. The knobs are representing the basic controls required for a delay/echo. Level setting the balance between clean, or dry and processed, or wet signal. Feedback controls the amount of repeats and delay time is pretty self explanatory. And what’s more important, the delay time ranges from nothing to up to 2000ms.  2000 milliseconds in this price range is very, very respectable. Last knob is a switch for the effect type modes. I’ll say a few words about these in a second.

How does it sound?
Well. To begin with, great. Controls are well responding and the six modes offered all sound different. First mode, the HIFI, has its overall tone in Boss DD-7 direction, with still being pleasant and usable. Usually this type of pristine on digital delays ends up in emphasizing the high frequency content resulting in extremely cold and piercing repeats. This one here has great tone, even on HIFI mode. Next two are Analogue and Tape Echo modes. These have similarities, but both of them do a very decent job on modelling the types they represent. Multi-tap is next, and it’s a great feature. The repeats are handled in a different manner than on the previous modes. Sure, the mode doesn’t live up to all its potential since the controls are just basic. Nice addition still. Then we have the Reverse mode. To my ears, this reverse is better than the one we’ll find in Digitech’s Digidelay. Simpy put, usable reverse delay. The lasts mode is Mod Filter. So we do get a modulation delay in the mix too. The modulation, obviously lacking in controls, isn’t the best modulation delay i’ve heard, but still. A very good one.

This set of features with all the different digital delay tones. Usually cheap does not add up to good. This time is does. While the engineers have been forced to drop a few things out, they have still managed to squeeze a respectable amount of features in a such small package. I have very little negative to say about this pedal.