What is it?
Danelectro DW-2 Trip L Wah. Made in china between 1996 and 1999. This is one of three rocker pedals i’ve categorized as belonging to “Vintage Series”.

Enclosure design. The biggest thing that separates Danelectro from the rest. Same thing goes to their guitars and amps too. I’m under the impression that the old ones are good. The relaunch of the brand in 1996 made things fun, but with everything being cool, the quality control was trumped by low prices and volume of manufacturing. The Trip L Wah sure does look interesting. The unit looks like a car with zebra paint. This is the greatest and the most unique feature here. 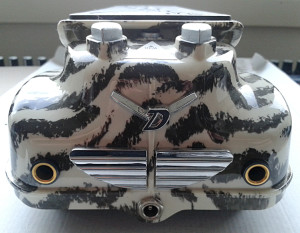 The enclosure is made of cheap plastic and the designers have inarguably been after a special look instead of a usable, roadworthy pedal. Thickness of the plastic for the enclosure and as well as for the rocker board feel nowhere near sturdy. This feature drops the interest and user value to the mud for most. Me included. In other words, these pedals are entry-level toys, not real tools. The image below shows the real deal. The enclosure, including the metal bottom plate, is too lightweight to use. So Danelectro solved this by adding weight in form of metal bars. 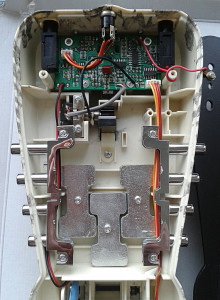 Usually, if the Danelectro visual design is completely different, the insides offer weird features too. For this one, not so much. The name Trip L Wah made me think of something strange in vein of the “60’s series” hippie boxes. You know, like what the talk box, reverse delay and “sitar emulation” offer. But no. We have three different wah voicing modes in a single pedal. Disappointing? Yes. 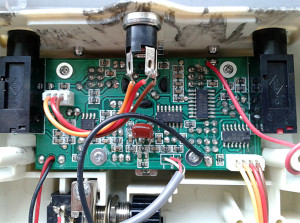 Pretty standard and rather boring bass wah, treble wah and middle wah modes. So sadly, it isn’t TRIP l-wah, but just triple wah.Due to following, i had little interest in figuring out how it works or how it’s electronically made.

How does it sound?
Rather dull. Three voicing modes, but this still offers nothing that you can’t get out of any other cheap wah. And those usually come in big metal boxes that can take years of use on the road. This wouldn’t last a weekend minitour. But it does make a real cool looking practice pedal for those who want to, well. Practice with their socks on. Decent tones for bedroom wahhin’. But if we’re honest, this serves the best as a decorative item. Sort of like a prelude for the Fab series in terms of enclosure plastic thickness. Cool looking thing to have, but next to useless.