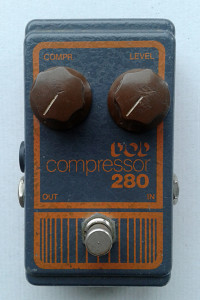 Late 70’s DOD classic. This particulat unit had mean pumping sound that made it pretty much unusable. So the previous owner had it modded by me. Instead of doing something permanent and killing the heart of the tone with extensive modding, i simply solved the pumping by other means. The box itself, by appearance, would definitely make you think about MXR Dyna Compressor and its big sister, the Ross Compressor. But this assumption would be completely wrong. Even though the box layout is the same, the guts are nothing alike. Dyna and Ross both rely on the OTA, while 280 is an optical design. The schematic can be found by using any internet search engine and there are number of slightly different versions around. You should check them out for yourself, if you’re interested.

Back to the mod. Like i said, the effect was just way too steep to call it even remotely usable. The LDR simply attenuated the attack too much, even when the compression control was set at minimum. The opamp was taking the LDR’s control too heavily, so i figured that the best way to make this more usable was to add a trimmer pot in series with the LED that controls the LDR inside the VTL5C2 Vactrol. I added the trimmer after the 4k7 resistor, leaving this resistor in place. So that once the trimmer was set at minimum, the effect would be exactly like it was before this mod. This simple procedure made the controls a lot better. Maxing the controls can still be too much for most compressor users, but this solved most of the issue. In this session i also swapped a new battery snap to replace the broken one and added a modern standard power jack. After all, it did fit. 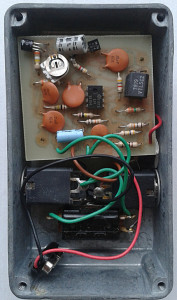 Looking at the guts, this is definitely a beauty. Real heart warming old school manufacturing. The design itself is something that may have been influenced by older Ibanez optical compressors of the seventies. Meaning that the main amplifier takes care of the compression with gain modulation controlled by the output signal. The trigger for the Vactrol is taken care by two transistors and half of a opamp. I’m not convinced that the design is completely copied from  elsewhere. Knobs on mine do not look like the original ones, but they do look reasonably good here.

Working units of this age always make me feel good. Like everything wasn’t already lost.

How does it sound?
Big and fat. Capable of boosting even the hottest pickups with clean, almost hi-fi definition. While the mod described above makes the attack time range (or depth) of the effect way more usable, the word here would still be – a classic. I think it may have been due to wide availability of OTA chips that killed the optical designs, but nowadays there are several manufacturers doing Vactrol controlled devices again.The OTAs may have been cheaper, but they never did quite catch the behavior of a light controlled circuits. So in all. Amazing box by its design, manufacturing and most important of all – the sound.

There is 2014 released reissue out. I may need to get one someday and compare.