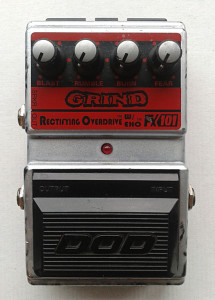 What is it?
DOD FX101 Grind – Rectyfying Overdrive with EHO (Even Harmonic Overdrive). From FX-series, made in USA between 1996 and 1999.

I was under the impression that the circuit found here would be exactly the same as for FX100 Even Harmonic Overdrive with just very slight changes. Reason for this belief is due to America’s Pedal page for these two effects. Both released at the same time and sharing features, such as speaker emulated output and.. Well. The board design is the same. While the board is the same for both models and thus, they share parts of the topology, there are noticeable differences between the two. Just check the photos for the boards at America’s Pedal. FX100 and FX101. The label on the unit says “with EHO”, so there are many things that are the same – but not all.

I heard about Grind from a friend who told me that it was awesome when used in a feedback loop. This notion puzzled me a bit, since i was pretty certain the effect was the same as the sister pedal, EHO. Once i had a chance to aqcuire one, i went for it. 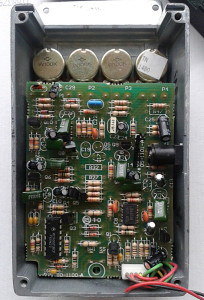 Saddly, there’s no clear schematic available, factory or otherwise. It still is a distortion unit with two dual opamps. What comes to controls, we have imaginative names in place. Blast is out volume control. Rumble and Burn depict lows and highs. Gain/distortion control is called Fear. As the schematic is missing, i can’t confirm with much certainty, but i believe the EQ controls are gyrators. May the electronic design be whatever, the best part is…

How does it sound?
Fat and usable, good distortion that handles mild overdriven, boosted tones and goes all the way to glass shattering massive Marshall stack. The marketing puts more weight on the metal aspect, but this thing can really go from bluesy to cruel. Usually boxes with preception of being able to do these kind of things leave us half way, with at least second part of the two features either sounding bad or not working at all. Here, the effect is capable of handling modern output pickups too, without sounding bad. Sure, the tone is bigger with moderate/vintage pickups, but still. Good EQ-section and i’ve found myself using this much more than i expected. Mostly for doing my home demo recordings. But in case like this. The pedal being capable of giving out decent tones for base and leads. I don’t see much wrong with it.

As almost non-related side note – the label is definitely “with EHO”, not “with Echo” as some sources seem to refer.