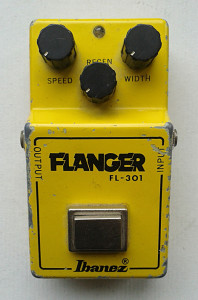 I used to own the DX version back in the day. Difference between this, the first 0-series flanger and the second DX version is the operational voltage. This puppy demands 18 Volts, while the De Luxe version promises the same tones with half of that. Got this unit in a trade and i must say i’m rather happy with it.

Opened it up and everything looks almost as it should. I’m not convinced about the battery snap joint for the second red lead, but otherwise the unit looks pretty much untouched. Since this operates with 18V, there’s a chance the most use has been with a batteries. Which would in part mean that those snaps would have been broken at one point. After all, the age of the unit is 35 years at the time i’m writing this. What comes to the aesthetics, this has been in use. A lot. 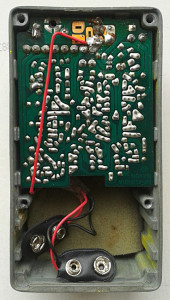 The most pleasing part is the circuit. Old school Maxon board design that will always get my smile out. Acidy trace corners and mojo soldering. Nothing new, but always pleasing. To flip the board over, we have a full house. TL-chips for buffering, mixing and LFO and the delay line is made with MN3007 BBD and MN3101 clock. There is a factory schematic in the wild, so one can check it. I should probably check the caps someday soon. Couple of the joints on solder side look a bit darkened.. 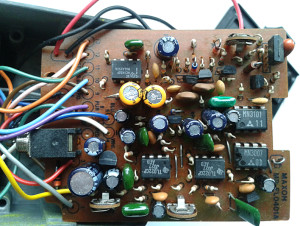 Aside from being a beautiful relic, the pedal has decent controls too. I didn’t touch any of the three trimmers as i didn’t any reason to do so. There are speed and width controls for the LFO and one more control for feedback of the delay line, called regeneration. Solid and beautiful. I sure do hope i get more chances to acquire 0-series and other old Ibanez boxes. These just feel so right.

How does it sound?
Since the purchase of Rolls Vibraflange ages ago, i started to look for different things in flanger tones. Previously i was just after the choruses with longer delay times, the velcro airplanes and vibrato substitutes. The Rolls unit taught my that some flangers can and will do more. With mild enough settings, the modulated delay will just affect the high frequencies in audible manner. Which isn’t the everyday flanger tone, but it sure brightens the clean guitar sound up. Not all flangers are able to achieve that. That may be the biggest reason that Rolls Vibraflange turned me around. You may now think why i keep bringing that unit up in a FL-301 article. Because FL-301 can do the same things as Vibraflange.

And it can do those velcro airplanes, choruses and vibrato substitutions. With such a low number of controls, the versatility is amazing. From mild bright bringer to a vibe to a chorus to a velcro airplane. It’s all in there with a hint of yesterday and another hint of beauty. In a nutshell, this is a great sounding unit with certain special something going for it. I do think the 18V may have something to do with it.