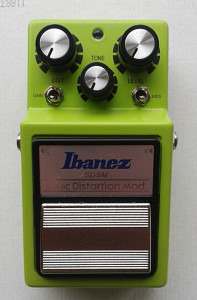 What is it?
Ibanez SD9M Sonic Distortion Mod from the modern 9-serie “reissue” line. Made in china, early 10’s

I still haven’t been able to score the original, classic Sonic Distortion for a reasonable price, but i did manage to find this one a while back. And as usual, i needed to see what it’s made of. The box  is a modern version of the familiar classic with a battery door and four screw fixed bottom plate. Followed by a insulating plastic between the circuit board and the plate. The circuit is fastened to the box with another screw. What  comes to the board itself, this looks like all the modern 9-serie boards. More modern than vintage units, but still quite neat. 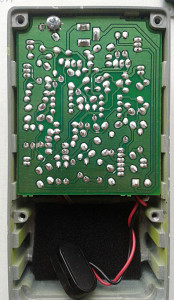 Similarities with the other new niners continue once the main board is lifted. Everything is board mounted, but still keep the feel high. Offboard wires are connected with plastic terminals to keep the manual labour in reasonable scale. As with 7-series, all the different parts have their own circuit boards. One for main board, one for control pots and one for each in/out jack. In this case, even the two toggle switches have their own PCBs. 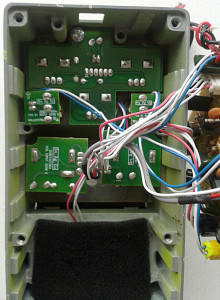 What comes to the design, there is a traced schematic (sans switching circuitry) up at Aion’s page. When compared against the original, non-mod version, there are a number of differences, while a few key parts are in tact. Both versions have a transistor based input buffers, followed by a gain amplifier opamp channel. Next up, tis version has a gain switch which sets the gain from normal no amplification in one position to the second which has 10 times the level. After those it’s the hard clipping diodes shunt to ground and the tone control. The not completely different to big muff tone stack section has also a switch for swapping a cap value for the one that handles the low pass filter. 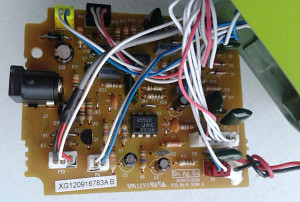 After those, the mod version has a half of an opamp for output buffer, which is not present in the original. In other words, the modifications to the original circuit are more than just added two switches which are the most visible changes to the pedal. These are gain and mids modes that alter the signal level before the hard clipping stage and the low pass filter on the tone stack. In a sense the design is clean boosting opamp driver stage, followed by a Rat styled hard clipping, followed by a Big Muff style tone control. Rest of it isn’t affecting the tone as much as those building blocks. What’s more interesting is that…

How does it sound?
While i do not have the original SD9 at the time writing this, i’ve played around with the circuit on a breadboard and cloned it. If my aural memory serves me even remotely right, there is still the same powerful and neat distortion present for both models. Soaring and definitely usable. But for the added gain and versatility for this mod version, we have a very nice distortion tones that are very much relevant today. High gain mode can still boost the modern high output pickups while still sounding great. And the non-boosted mode will give the sound and feel of the original SD9. Although it’s all relatively simple and there isn’t any super high wow-factor in the design, i was blown away when i first tried the circuit. It may be due to its simplicity, but man it sounds great. Recommended pedal to try out.