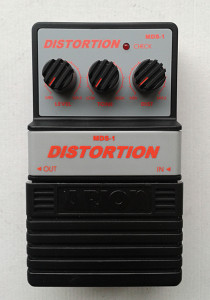 What is it?
Aria MDS-1 Distortion. Made in Sri Lanka, possibly around mid 00’s.

As plastic, low price point pedals come, i’ve found Arion to be one of the best. The housings are way more solid than what we find in Rocktek, Aria and similar 80’s/90’s cheapos. Earlier Arions were made in japan, but the more current production is done in sri lanka. The designs are the same, more or less, as for those 80’s classics. And the quality assurance is probably still over seed by japanese mother company. At least the build quality is very good. After all, sri lanka may not be the biggest exporter of guitar effects.

It’s always pretty cheap to move the manufacturing to somewhere else once the design has been proven to be on spot. As the circuit board below shows, there is that certain acidy feel to the traces and the board design could possibly be traced back to earlier versions of Arion Distortion. And it can. There are still “UKM Japan” prints on both sides of the board. 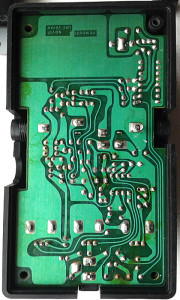 At first i just thought this would be nothing more but a dull sounding, plastic feeling remake of Boss DS-1. Quick glance at the component side does not support this assumption. And quick eyeballin’ the internet didn’t yield a schematic, so this would make it to my list of units to trace. One thing’s for certain. There are LEDs in there, and i’m thinking those are at least partly, doing the clipping. 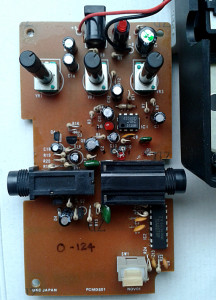 A plastic housing that’s ok, decent build quality and neat design. I feel like these “re-issues” do not come far off from the original japanese units. Biggest culprits are the weak(ish) pots and their knobs, which have a tendency of simply falling off without any agitation. Also the battery compartment door is good to mention. It’s not holding on to the enclosure by anything but just quite brittle plastic clamps. I do not find much wrong with the rest. This, including…

How does it sound?
The big, boosting and solid sounding distortion we get out of it. The texture is very pleasing and there’s no broken quality to the tone usually associated with simple diode or LED clipping. And the output level. Oh boy. This thing can boost even your modern high output humbuckers. So no. It doesn’t sound anything like the Boss DS-1, but it’s very usable, thick sounding distortion. Almost sonic bliss. This here is the reason why the plasticky overall feel doesn’t matter that much for Arion boxes.