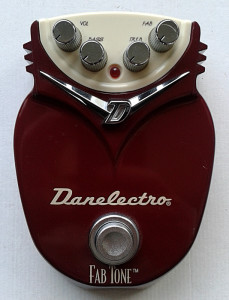 What is it?
Danelectro DD-1 Fab Tone Distortion from Dano original series. Made in china around 1997.

Distortion from original series.. Since all the others have certain vintage vibe to their tones, i had no expectations one way or another. On the other hand, i’ve had this unit for years now and it’s not that easy to write about it as this was my first encounter. There have been rumours about the design being a slight derivative of Boss MT-2 Metal Zone. Sure. Both are guitar effects. There is a floater schematic available. Huge image, and there are some similar parts in there. But i would not call this a Metal Zone. Nor even a derivative for that matter. 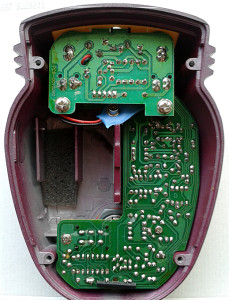 The box is solid and weights a ton. The boards are your average chinese make with reasonably good soldering. These will never be scarce in used pedal market and thus, the price will probably stay in pennies for the next decade or two. The most disliked feature in the box design must be the plastic board mounted jacks that are kept in place by the two screws. The same two that hold the jack board in place. There is nothing else fastening them. I for one have only seen a few broken jacks on this enclosure type. That’s nothing when compared to usual faults, the dead capacitors…

How does it sound?
Very decent high gainer, with good EQ controls. These units should give you usable lead tones for decent price. For the brave one, this could serve as a good mod surface too. Lower gain and not as shrilling highs would be something i would go for. But. Since i don’t have a double and this unit is in nice condition. Nope. Not modding mine.

Either way. Think of something between a Marshall Shredmaster and a Boss Metal Zone or Heavy Metal. This is way more of a distortion than an overdrive, but there is plenty of tweakable usability in there. Not a bad pedal.