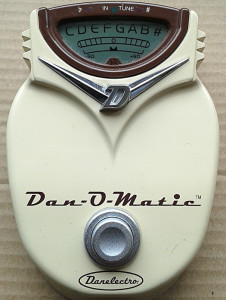 This model was the very first of tuner pedals in the Dano pedal catalogue. It was replaced with the red DT-2 a bit later (which i’m still missing to complete my Original series collection at the time writing this). Due to not having the DT-2, i can’t compare the two. Anyway. To begin with, the housing is the classic big heavy cast metal as with the others in the series. 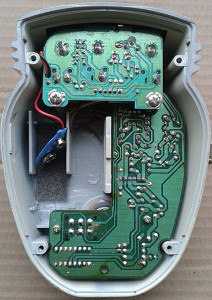 Housing is the same as in others, having the two battery slots while only one in use. It’s a digital tuner pedal, so i didn’t have the enthusiasm to take the boards out. I’m pretty certain that all Dano tuners utilize the same technology. This meaning that while the accuracy may be sufficient, the dim liquid crystal display is the biggest culprit. Using this at home in a broad daylight isn’t a problem. But once you take it to the stage, you’re f’d.

So it is pretty much the predecessor for Mini series tuners. Only in less usable metal housing and with same ailments.

How does it sound?
Like most if not all tuners. It doesn’t. It’s reasonably accurate stage tuner with standard Dano electronic bypass. Due to it’s relatively dim LCD, it’s next to useless. Sure it is decently built and a nice looking thing. But that’s where the good stuff ends. No. I do not have much good to say about it, so i might as well just stop here.