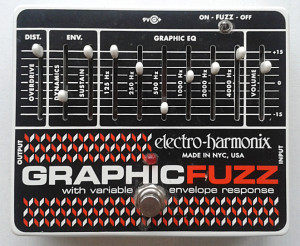 What is it?
Electro-Harmonix Graphic Fuzz with variable envelope response, from XO-series. Made in NYC in the late 00’s. Most likely in 2009.

A friend was letting this one go and i just simply couldn’t help myself. Pricing for an used Graphic Fuzz isn’t too cheap, but then again – it definitely isn’t one of your average straight up clones or slight derivatives of something else. The box is big, but there are ten large slide pots for the controls. Reasonable spacing for standard rotary potentiometers would have possibly called for even bigger box. That would also have taken the graphic EQ out of the equation. I took a peek inside once i got my hands on the unit. 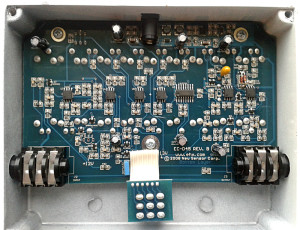 I see six dual opamps and no inductors. This means that the EQ section is done with gyrators and in the same manner as found in most modern graphic EQs. Rest of the features are not that simple to see by just looking at the board layout. There is a fuzz that can be switched on and off and there is a “variable envelope response”, which acts almost as a compressor. But not quite. I’d say it functions closer to an envelope generator we find on synthesizers. No, it does not act exactly like those either. Still, the dynamics slide sets the attack of the tone and sustain sets the release.

So the set of features is pretty much a thought that comes from outside of the box. Original idea, but does it carry us far enough?

How does it sound?
Almost but not quite. We are stuck with relatively faceless graphic EQ and a fuzz/overdrive that’s quite close to the one knob Muff Overdrive. Not any version of Big Muff. The one knob Muff. You know, the one that comes in red and green from the nano series. The EQ works well, while it is rather generic. Then agai, no of us might even want a graphic EQ with a personality. It does, however, make the fuzz/overdrive a lot more usable. For the envelope part.. I do not have that many good words about it. It works like nothing else, so it’s hard to wrap your head around it. Versatile, yes. Usable, well, ok. Good? Maybe i wouldn’t go that far. Interesting. That would be a good word to describe the unit.

Nice set of features and these could serve a purpose for those who want something different ™. Wide set of features, but the tones leave me somewhat cold. Not the worst EHX box, though.