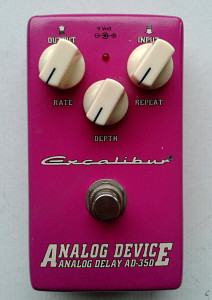 What is it?
Excalibur Analog Delay AD-350 Analog Device. Made in china around 2006.

Someone i know was selling the lot of these Excalibur brand pedals. Local musician’s forum had no bad words, just a few descriptions about tone and such. The price for the three pedals was ok, including this (which was the most interesting one), the Tone Screamer and the Holy Grail Distortion. These three are apparently the only pedals in the Excalibur catalog. At first everything seemed ok with the slightly customized 125B-style enclosures and the original retail packaging.  Initial testing left me a bit puzzled. Why the representation in my are had seized and why the brand had never released more designs (slight edit/update: there have apparently been at least two design from the Biyang catalog, sold as Excaliburs in late 00’s). The testing and bang for buck ratio seemed nice, but i had still a few questions left in me. The box has several references to analog delay, but the first impression on tone left me feeling like something was a bit off. Brand promotes itself as a german brand and there are just overdrive, distortion and delay. If i’m worrying about nothing, then i’d definitely praise these things to the world’s end.

Had to open it up to see what was going on. The first impression was not that pleasing. Yup. This is not made in germany. Flux residue tells us everything we ever need to know about the board and component origin. If this isn’t chinese, i know nothing about pedal electronics. But that’s not all. Notice how the board mount plastic jacks are just floating behind the holes in the enclosure. And flip the board over… 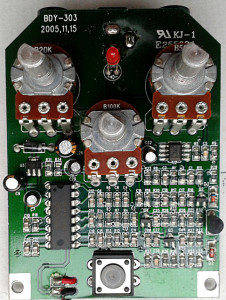 And all i see is a regulator, one opamp, one through hole FET and a chip that is not an analog delay bucket brigade device. Let’s look a bit closer… 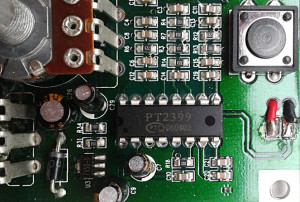 Yup. F this. It’ s nothing more than a standard PT2399 based delay that is slightly tweaked to sound more vintage, or in other words, bad. Not too great SMD construction and there we have it. No. I’m not pleased. I feel swindled. Not by the guy i got this from, but the Excalibur brand itself.

If we count the pedal itself and the box, there are 8 references to “Analog”. And since the PT2399 is definitely NOT an analog chip with its built-in high (or at least reasonable) quality AD/DA converters. After reading about this a bit more, the unit is apparently the same circuit we find in Belcat branded “Analog Delay”, another cheat in the market. There are others too, like the cheapo Artec Analog Delay, which all are PT2399 based digital delays.

Conclusion? Do your homework before you buy anything. You don’t want to end up like me with these three… Unless you just want to find out what these things are made of. That’s basically the only good reason to get one.

How does it sound?
Decent modelling of an analog delay. In a sense it’s worse than most PT2399 pedals, but that’s what you get when you try to use this chip for recreation of a true analog device. Stays clean on short delay times and dirties up on longer. No endless feedbacks or any other out-there features. Just basic delay. Not that bad sounding, but the lies just taint it up and bad.

No i don’t recommend any Excalibur brand pedals to anyone. Cheapest china crap peddled by a german business men. If you want the same tone, just grab the Blecat cheat for an “Analog delay” instead. You’ll get the same amount of street cred from me in both cases.

And no. This is not an analog delay.