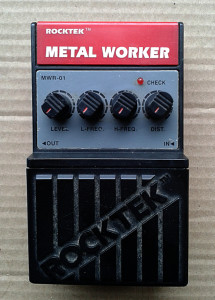 What is it?
Rocktek MWR-01 Metal Worker Distortion. Made in china, around early to mid 90’s.

For some reason i dig these old cheap plastic things. For what’s interesting is that while these were clearly intended as an entry level boxes for the folks who bought their kids the very first guitar set, the designs are not bad. The plastic boxes follow strictly the methods of a decade older japanese designs. While these were made in china, the feel inside is per Arion, Aria, Monacor and tons of other japanese brands from the eighties.  I somehow feel like these all were originally designed by the same people. The obvious downsides are the brittle and cheap feeling plastic and weak pots with annoyingly loose fastening of the knobs. Not to mention the battery compartment lid, which can be lost. But once we open these up.. 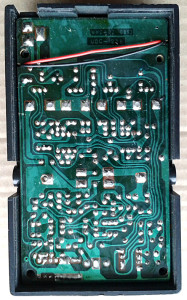 The board looks a lot like the japanese ones found from the brands mentioned above. Traces look neat and the work isn’t bad at all. Without the “made in china” text on the bottom plate, i’d think this was a japanese build. 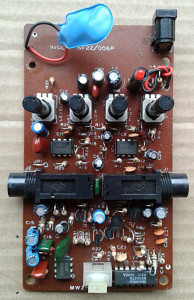 There’s no schematic available, but to me this seems like a three 6458 dual opamp distortion with two of the channels used as gyrators for the tone controls. In a sense, not that far off from Boss HM-2, DOD American Metal and others. I can see three diode clipping sections, but none of them look like germaniums. So there is a great chance that the designs isn’t that close to the HM-pedals. Either way, the tone controls are effective and other than cheap aging plastic, there isn’t that much bad i can say.

How does it sound?
Beefy with decent output levels and reasonably good EQ controls. The tone does not go to the chainsaw territory, while it still has a noticeable metal quality to it. To be completely honest, this doesn’t sound bad at all. In fact, i’d choose this over either one of Danelectro Cool Cat series metal pedals in a heartbeat. It doesn’t sound as good as Boss HM-2, but very good nevertheless.

This brand keeps surprising me. The housing may be cheap and the pots weak on all Rocktek pedals, but there is one aspect where they have not saved money on majority of the pedals from this brand. The board and sound quality. I know this is a lot to say about one of the cheapest brands in the history of the guitar pedal. But sure enough. Rocktek did a number of things right. I just may need to get my hands on more of these…