What is it?
Arion MTE-1 Tubulator. Made in Sri Lanka, around early 00’s

A Tubulator? Yes. Can anyone guess what the base circuit design is? By the name and three controls, Level, Tone and gain, which is named as Dist, there should not be that many questions. There is a schematic up at Matsumin’s page (switching not depicted). So let’s take a look at those extremely beautiful, acid trip traces with pretty hand drawn feel to it before examining the schematic a bit. 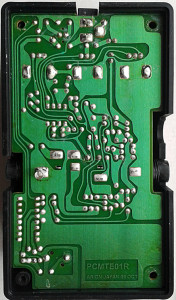 Pretty. Isn’t it. Anyway. To read the schematic a bit, we don’t have an input buffer for the circuit input, just for the bypass path. This does look a bit strange, since it’ll mean that the circuit input is connected to your guitar at all times. It seems, however, that the input impedance of the JFET bypass buffer is higher that the gain block’s impedance. The capacitors at the input of the first gain stage (two 33n caps in series) seem a bit low in terms of letting lower frequencies in. Still on par or at least close to what we find in the design this is obviously derived from. Then for the gain block. This is very common setup for these “tube overdrives”. Noticeable and somewhat audible difference comes from 56n capacitor form inverting input to ground. This’ll shift the high pass filter created by the gain stage a hint lower, affecting the lows for the better. The value versus the value in several other “tube overdrives” is pretty close but should make a nice, subtle difference. 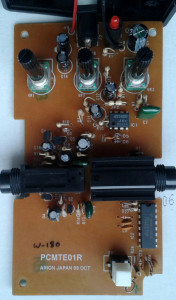 Then for the Tone control. This part is the same as in those “tube overdrives” mentioned earlier. Yes. I’ll be using quotation on this all the way until i say it out loud.. Then we have the Volume control, shunt to ground instead of the usual VREF. And then comes the output buffering. Simple, yet effective. I just had to snap a photo of the original retail box. Notice the short spiel – Very Intense Tube Emulation Pedal.

I sure do hope all of you got the point for this design without me saying it? Yes. It is an ever so slightly modified, Yet Another Tubescreamer.

How does it sound?
Close to the ye oldee Maxon design. Nothing new, nothing special, but still slightly more pleasing in its overall tone when compared to TS808/9. If it wasn’t housed in plastic (which in this case isn’t that big of a minus), this would probably stand out nicely form vast majority of all the other Tube Overdrive (un)designs. Maybe not much, but a bit. It acts close to TS808 and TS9 with its relatively sluggish output level and mid-honking cold, dead hand slapping you on to top of your head. Subtly more content on lows, but not much. Reasonable controls too. As with 98 per cent of all TS derivatives, the overall tone shines on vintage output pickups, but goes from horrible to completely unusable with modern pups with over 12K DC resistance. For the price, this is very decent TS-derivative.