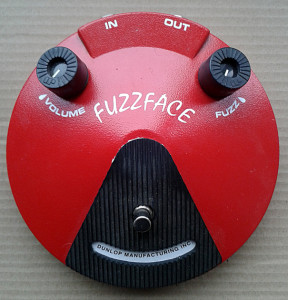 What is it?
Dunlop JDF2 Fuzz Face. No idea where Dunlop currently makes these. If pot date codes are correct, this unit may have been rolled out in 2010.

I’ve already written about the blue Jimi Hendrix model, which seemed like a decent silicon transistor remake of the unit Jimi used back in the day. That unit did look like a vintage board. But it turned out to be a borg with its surface mount components and trimmers hidden on the solder side. I was quite reluctant to open this up due to the experience provided by the Hendrix model. Somehow i’m glad i eventually did.

For these later units, the board doesn’t even try to look like vintage units. It’s your standard modern Dunlop board with ground fills and lead-free solder. On top of that, we have trimmers for bias, which are hot glued to their places. 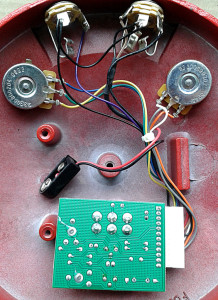 Jacks and pots are connected with a clip on terminal and to minimize the amount of labour, the tiny board is mounted to the stomp switch terminals. This makes me wonder if those mini Fuzz Faces introduced in early 10’s have the same board inside. It would make sense. The transistors are AC218s, or at least they try to be. Those look a lot like restamped germaniums to me. If i try really hard to find something good to say, the pots, jacks and the battery snap are quality items that should be able to take a hit or two on the road.

No DC jack, nor any other good things we usually find in modern effects. Expect for the board, obviously. In all rather disappointing use for this enclosure. One should be able to score a period correct reproduction PCB through internet and use the enclosure with that.  But then again.. This is a piece of evidence how big brand and volumes can shift the idea in a design to something completely different. This will also be a part of Fuzz Face history, there’s no disputing that. In all. Decent unit. Nothing great and definitely nothing even close to the units sold as Fuzz Faces just a decade or two ago.

How does it sound?
Like every other Fuzz Face and its straight-on derivative. Sluggish output level, all or nothing -type of controls, decent behaviour with guitar controls and well. Most of that original Fuzz Face magic in sound is present. I’d say this is very nice entry level fuzz for the youngster who want to get their hands dirty with their very first germanium fuzz. Some might consider this a keeper due to it’s tone. I find it as a keeper only because it resembles the golden oldie visually. Tone is rather close and visual aesthetics are in place. That’s about it. Very cheap to manufacture and due to its reputation, the price is also easy to keep high. Still. Recommended for a first fuzz device (never mind the Big Muff Pi for this urpose), but that’s pretty much it. Get one if you can, but don’t pay too much for this Dunlop model.