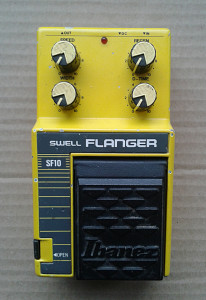 Swell. I have no idea where the name comes from. But does it matter? Probably not. Solid 10-series pedal with nothing off from the rest of the bunch. The series is rather large with “only” 36 titles in it. And when we take in to account that this series wasn’t manufactured for too long (from around ’86 to ’89 – less than four years), there are bound to be some recycling on the designs from earlier series. The number of different units and the vast number units being traded at auction sites makes me think that the Maxon factory had to be running on full between 1986 and 1989. 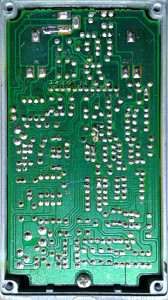 Board and build quality is on par with the others in the series and also on par with the L/Master series. After all, both series were made in japan. Actually, the difference between the series are minor. The rubber mat on top of the stomp lid vs. the hard plastic lid and the slightly cheaper pots. Of course the naming of the units and slight visual differences too. But for the main boards, these two series are a very close to each other. Now that i remember, i’ve actually seen more Master series units with broken pots than Power series units with the same fault. Funny. Most folks will simply repeat the mantra found on numerous forums – “the power series pots are worse than the good pots on master series”. Due to my limited empirical experience, no. That is not correct. Sure the Master series pots feel sturdier. But right now, i’m not that convinced about them being simply “better”. 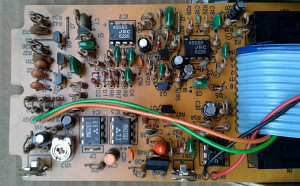 To get on with it, this design is the newest of the bunch. Meaning that the four knob flanger design we all love to play around was first introduced as 9-series unit, FL9 in the early 80’s (this FL9 design is a derivative of FL-301 and the other older Maxon/Ibanez flangers). This circuit was then redrawn for the Master series and sold as FLL Flanger. And then we have the SF10, which uses the same exact PCB as the FLL. So it is the same effect in yellow enclosure instead of greyish black. And since this is the same effect…

How does it sound?
It sounds exactly like FL9 and FLL. Deep, powerful flanger with great set of controls. This unit goes from that glassy, brittle, static and thin tone all the way to the airplane territory. In addition to those two ends, there is everything in the middle. A chorusey flange, a vibrato-like wobble and so on. Exactly like a great flanger unit should. What more can i say? Versatile flanger that will suit most situations where flanger is needed. A classic. And a standard in great flanger units.

If you are in denial about greatness and proper use of flangers, this (or any of its sister models) is the unit to try out.