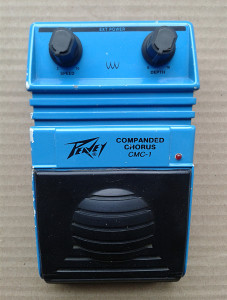 I’m not sure if this series has a name. At least quick searching didn’t yield one. Not that it matters that much. It’s the series Peavey marketed in the mid-80’s and it has various effects in rather cool housing. This one’s blue, so we can be certain it’s a chorus. The box is very decent and should take a punch and years on the road with no issues. 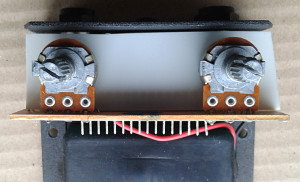 I did talk about the housing a bit on the Hot Foot Distortion post before, so there’s nothing new here. Just very solid box design that i’d call sturdy. Electronics come together with three parts. One for controls, one for jacks and one for the main board. The jack and control boards are connected to each other with pins and the main board connects to the control board with pin headers and a ribbon cable. 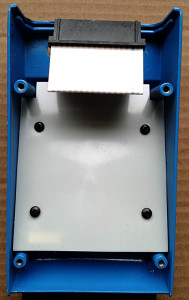 Everything is fastened with screws and there will be nothing moving around without a sledgehammer. Unless we unscrew the screws, obviously. I was expecting to see a similar board as in Hot Foot, but not this time. Actually. I was rather surprised to see a surface mount board. It is neat though. 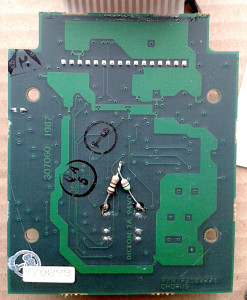 And full. All SMD, except for the clock and delay chips, status indicator LED and the MEC stomp switch. The main method of switching is very likely to be the same as in Hot foot, but that’s the only common thing in addition to board fastening methods and control/jack boards. As the name suggests, the circuit is companded chorus. After buffering we have NE571 dual compander chip. The other half is squeezing the signal to be fed to the MN3007 BBD delay line (which is LFO controlled by MN3101 clock). Then the chorused signal is widened back by the other half of the NE571, buffered and spewed out. 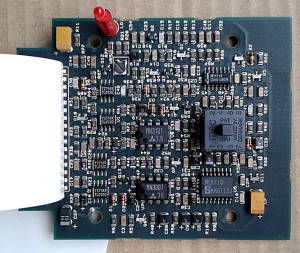 If some of you are not aware why would a designer use a compander before and after the delay line, the answer is rather simple. With a compander, the audible noise content of the signal disappears when it’s processed like this. And then you might ask what this means for the sound of the pedal.. Well.

How does it sound?
Very much Boss CE-2 style smooth and overtaking chorus. The companded idea takes the noise out, so the analog delay line sounds pristine. Controls range is wider than what the CE-2 offers, but not by that much. Actually the overall tone does resemble the Boss classic a lot. Even the clock+BBD are the same. So in essence this sounds close, with slightly better controls and less noise content. Not a bad chorus at all. One of my current favourites.