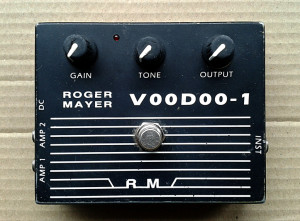 Got this unit in a trade from a friend (thx Jaakko!). Mr. Mayer is The Original Boutiquer, so obviously i was interested. I’m not going into the history of the man, but if you are interested, you could check out the short history up on Roger’s page. The first image on that page tells you everything you need to know.

The unit on hand has seen a lot, and i mean a lot of use. My friend had bought this in mid 90’s and had it ever since. The battery stoppers (very nice idea) and a tiny wood block to keep the DC jack in palce have been added by him. I saw no reason to take them down. Anyway. Just recently he had gone into this thing called “pickup roulette” and got himself a nice modern, hot set of humbuckers. His observation was that the unit may be broken as it can’t boost the signal like it used to do with strat single coils before. I promised to take a look and i did. And demonstrated how the design will not work the same with +15K humbuckers in contrast to ~5K singles. So it is a feature that should be taken into account. 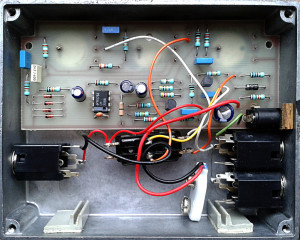 This doesn’t mean that there is anything wrong with the design. It’s just that when the design was conceived, over 16K humbuckers were not as widely used as they are today. Some will argue that those do not sound “better”, and i must respectfully agree for most parts (anything under 12k for bridge is a waste of time, anything over 12k for neck is also a waste of time – but that’s just me and preference in tone is definitely a subject to personal taste). As a conclusion, this unit works as a boost very nicely. All the way to having too hot pickups.

What comes to desing, i find very little negative to say. There is a traced schem up at FIS, so check it out. There is a lot of out of box thinking going on in there. While some still deem this as nothing more but a Rat derivative, the schematic shows that it is not. Only obvious thing that’s common for both is the use of LM308 high gain opamp and utilization of hard clipping shunt to ground. That’s like saying everything with JRC4558 is a Tubescreamer derivative. In that case your old clock radio that wakes you up would be a TS-derivative. So no. This is not a rat. The signal path starts with a single transistor gain stage that drives the main gain stage. The gain there is set by taking a pot between inverting input and ground. Notice how the first gain stage also acts as a reference voltage supply for the non-inverting input. This is something i do not recall seeing every day. The main gain stage is followed by two pairs of diodes shunt to ground. This will result in hard, but still still mellow sounding diode clipping, that isn’t that far off from synth-like wave shaping. After the clipping there’s a tone control that may (or may not) have its root in the infamous Big Muff tone stack. After that, there’s an output buffer. One last thing to point out.. Check the 1M6 resistor acting as a feedback loop over the entire circuit. Yup. Figured you had not seen one like that before.

How does it sound?
Fat and big, if not massive. There’s a hint of fat Rat texture in there, but not much. It’s a good and usable sounding general distortion that will suit most styles and situations. Paired with an adult style delay one should be able to get those pesky 80’s thin lead tones. But with tone turned low, this will compete with many modern high end boutique pedals in the Marshall/Brown Sound territory.

Like stated, thepedal doesn’t exactly shine with modern high output pickups, but that’s the only bigger fault in its tone. The tone control is a thing of its own. Clockwise it’ll take a lot of lows away, but it offers very good control range from 7 o’clock to noon. In all, very good distortion design with its quirks. At least i seem to like it. A lot.