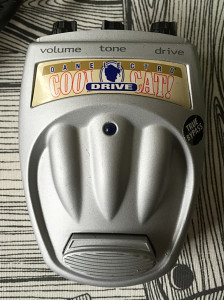 What is it?
Danelectro CO-1 Drive from Cool Cat series. Made in china, late 00’s.

Last one i had missing from my Cool Cat series collection. Pretty rare specimen actually. Finally found one from polish auction site and a friend delivered it. I’ve seen only couple of units on sale, mostly in US and with no shipping to europe. This makes me think the number of unit manufactured before switching to V2 were modest to say at least. The rumour was (and still is i guess,) that the CO-1 Drive is supposedly straight up clone of certain OCD and due to OCD trademark owner’s active protection of his intellectual property, Danelectro was somehow forced to revise the design. All this is just a speculation i’ve seen on the web. Truth is that the unit is pretty nice pedal. Even if it was a straight up clone, (which it obviously isn’t,) the original OCD is not exactly original either. 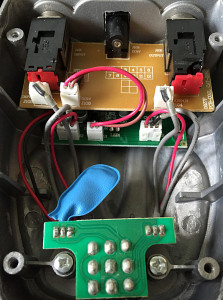 The release of V2 sure did keep this assumption of plagiarism alive. Well. There is a Cowprez traced schematic up on FSB (link may require user an account), which shows the circuit being rather close to the one mentioned above. Plus the CO-1 doesn’t have a switch for so called hp/lp modes, so the similarities end at the base sound and parts of the topology, mainly around the main driver circuit. But then again.. How many TS style circuits are out there with minimal chages to the original?

Or i could simply take this to another direction. The electronics inside the CO-1 Drive are extremely close to classic Voodoo Lab Overdrive, with added tone control. This could probably take your mindset away from the later boutique brands.

As for the rest of the pedal, we have our standard 3PDT true bypass and two small, stacked boards in a sturdy housing. In all, this is very decent driver/distortion. Pretty much exactly like with the others in the Cool Cat series.

How does it sound?
Open boutique styled drive pedal with nice amount of gain on the knob. Output level is also sufficient to actually drive your amp instead of just clipping the signal. Tone control range is also quite usable. It may very well save you from too bright amp/speaker combinations, as well as help you boost your top end. There’s very little negative to say.