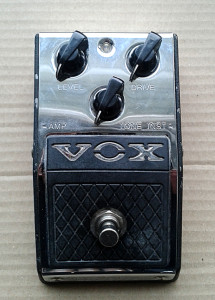 What is it?
Vox V830 Distortion Booster. Made in china around early to mid 00’s.

Sharing the box and switching/power circuitry with V810 Valve overdrive, the V830 is nothing close. Obviously one would instantly assume this to be a DS-1 derivative. What makes this assumption obvious is the fact that V810 is a Tubescreamer. And since there are just two boxes with these aesthetics, that was exactly what i was thinking before i checked the schematic or opened mine up. 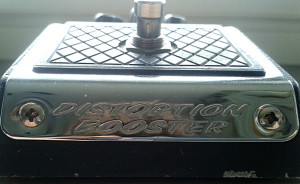 By just looking at the guts i was certain this isn’t a DS-1 derivative. And after checking the schematic up at FSB this was confirmed (you’ll need to be logged in to see the attachement on the FSB post). Actually. No other distortion unit came straight up to my mind when looking at the schem. At first we have a gain stage that’s familiar from all the TS-style designs. After that there’s another gain stage that shares the control with the latter. Then a hard clipping shunt diodes and a active filter stage, BMP-style tone control and output buffering. Nothing too out of the ordinary, but still not too common. 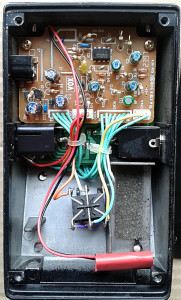 Which also means that the behaviour isn’t that average either. Drive control is very effective and there is a lot of usable range. Tone control is what it is. Variable LP/HP filter that is cutting some of the frequency range. The previous filtering stage is most likely in place to keep the mids in tact with the tone circuit. Anyway. This look neat and…

How does it sound?
Sounds pretty damn good. The combined soft/hard clipping has nice texture to it and the the two stacked gain stages offer levels of gain that could be described simply as enough. No, this isn’t one of those “metal” distortions by far. Running this to a slightly dirty amp will give you that big and thick distortion lead tone that still has some vintage color in it. Not to mention it will keep your preamp stage alive and gives out the best of the amp. In all, great looking and sounding device.