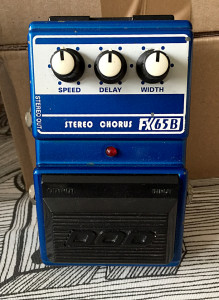 Number of things to take a look at here! To begin with, the cool info at America’s pedal tells us that this model was an entry level chorus that was added to the FX series line-up in 1997 – and discontinued the following year. Entry level pricing and pretty much modern standard set of controls, but the manufacturing spanned over 1997 and 1998 only, which means that the number of manufactured units cannot be extremely high – in case you are wondering about that, you should check what other models DOD had going for them during that period. Yup. This is not the only new one presented during the spring of 1997. And what’s obvious, the FX65B was a successor for FX65 chorus that was initially released in 1985. The B-version has no internal trimpots, while the delay line configuration remains per the previous model.  The FX65/B both utilize MN3007 BBD which is driven by MN3101 cl0ck (the same configuration as found in Boss CE-2/3 by the way – which will no doubt lead to me comparing this to CE-2…). 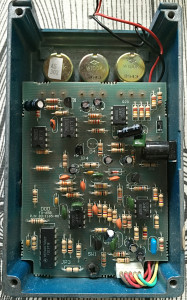 The LFO, mixing and buffering are done with three dual opamps, namely JRC4560. The non-B version has had number of revisions before this design, so the opamps have also been different during the 12 year run of the DOD FX-series budget chorus. The number of revisions were mostly seen at Due to board layout and opamp configuration, i’m leaning towards declaring this and its predecessors CE-2 derivatives. Most likely one of the opamp chips is performing as LFO, other as in/out buffers that include pre- and de-emphasis filtering. If the anti-aliasing filters are in place as they are in CE-2, then those are likely done with opamps instead of transistors. The three knob control set does suffice and offer very decent range of control. While the controls are not verbatim to CE-2, the main issue still stands…

How does it sound?
Not bad, but not ground breaking either. In 1997-98, this model has most likely had the best price/tone factor of all the units in the stores. If there is some unexplainable magic to the MN3007 BBD, then it is present here too. Sounding like a pretty basic, yet musical chorus and having nice, working set of controls, there’s little that can go wrong. And yes. There is a lot in common in terms of sound and tone with the heavily praised CE-2. So to acquire one of these (or the predecessor without the “B”) for current street prices is way more appealing idea than to hunt down a working CE-2 or CE-3 for at least three times the money. Sure this does not sound exactly like the praised classic, but still, this sounds very good and i see very little wrong with it.