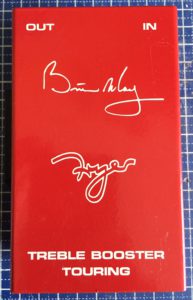 What is it?
Greg Fryer Brian May Signature Treble Booster Touring. Monster named unit that’s made most likely in th UK around 2010.

Don’t know where to begin. Got one of these in a trade and figured that i needed to have one, just to know what it’s all about. Sometimes i tend to look outside the box, but this is something that just doesn’t make all that much sense to me. Fryer guitars/amps/electronics is an UK brand that’s goal has been reproducing the Queen guitar tone since its formation in 2008. Mr. May is obvious idol for many for his high technical skill with guitar. I’ve listened to my share of Queen back in the day, so i’m quite happy that i don’t have to do so anymore. But then.. So a company based on marketing tools that can recreate this one guy’s tone? Sure. Why not. At least there seems to be a market and people to buy effect units, amps and guitars that’ll help them sound like mr. May. The original DIY amp that was used back in the day has been well documented and it’ll need a treble booster to make it distort per May’s tone. After all, it is just a ~0,75 watt germanium transistor loaded amplifier that runs on a single 9V battery. And since reissue and of the amp and a DIY kit of it were apparently a hit, there was a need to create suitable treble boosters for all the thousands of home guitarists chasing that May tone. There is some more info on Knight Audio Technologies page. And as the die hard May fans already know, i’m focusing on the factory made version(s), not the custom build original that mr. Fryer built for mr. May. The amp called Deacy amp and treble boosters are all listed at KAT store, with a bit more information that i can give. Anyway. There are three different boosters in this series, “Plus”, “Deluxe” and “Touring”. So far i’ve only seen a traced schematic for the Deluxe verion, but i believe these three are just voiced slightly differently between each other. And KAT shop descriptions agree with my assumption. 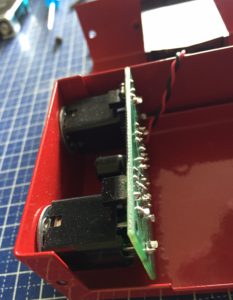 The box has an input jack, output jack and a battery door. That’s it – all three versions are the same. Which makes me believe all three also share the PCB and contruction with the other versions. For the trace, you could head over to Paul’s page at paulinthelab.com. There you’ll find a schematic for the Deluxe version. Does it surprise anyone when the schematic shows a slightly modified Rangemaster? Probably not. But the real surprise comes when we check the board inside the unit. 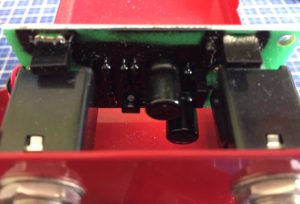 Yup. That’s goop. And reason to goop a Rangemaster clone? Seriously, i can’t come up with one. Trying to hide the fact that is is a Rangemaster without gain control? It is still just a single transistor treble booster that works in manner of dropping the lower frequencies and amplifying the treble content to a single transistor’s capabilities. As a gooped unit with such low feature list, i think it’s the best if we just move on.

How does it sound?
Like a treble booster. Kills your bottom and makes your guitar screech and scream. I have no access to Deacy amp or anything like it, so i can’t take a sip of the intended sound. As a standalone treble booster, this has a few advatages. Like the zeroconf. But then again, this feature has huge disadvantages as well. As is, this can only be used as always on unit, which i believe doesn’t suit that many guitarists. Think about it. You’ll spend a $1000€ on a guitar that has a sound that suits your preference, another $1000€ on an amp that, again, has a sound that suits your preference. Now, you take a $150€ treble booster that will discard most of the tone that your guitar and amp are capable of. And on top of this, you’ll be hooked on batteries for life. The current draw is minimal, but still. You’ll need to swap the battery at least before every gig so it won’t fail on you. I’d get the idea if this was presented as a basic stomp box which could be used on demand for leads and so on. Sure you can do that with a effects looper. But that’ll be still quite stupid idea as you get 5 EHX screaming birds for the price of one of these. You’ll really need to be in to May’s tone to even consider getting one of these.