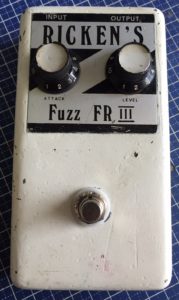 What is it?
Ricken’s Fuzz FR III, made by Jen in Italy around mid 70’s for “Ricken’s” and molested by several people later on.

To begin with, Jen used to make their III Fuzz for couple of brands, Ricken’s being one of them. Opportunity to trade one serviced unit in arose, and of course i was curious. Alert started to ring in my head with the word “serviced” as this claim was not followed by a name of anyone. Not anyone with reputation or experience with pedals or not, but not a name at all. Usually, when museum age vintage pedals are serviced, the seller or trader wants everyone to know who did the work as this will usually affect the value more than expected – and not necessarily towards a good direction. Next alerting fact that was when i said “you can send the blue pedal to …” and the answer was “the pedal is white”. So the unit was painted by someone and that someone didn’t even bother to remove the label plate from the face. The new coat nicely covers up the corners of the aluminum plate. I went ahead with the trade anyway, as the Jen version is rare enough to take action. These OEM’s even more – even though those are way less desirable and thus, sell for way less when available. Another thing was about the foot switch. The seller told me that it didn’t work perfectly. I told that this wasn’t an issue for me as i could fix it rather easily by just replacing the part. 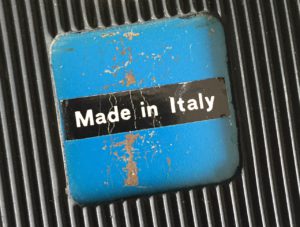 So the trade went through and i got the fuzz. The original knobs were in decent condition with just a few chips. Flipping the pedal over showed the original bottom rubber with cutout for the “Made in Italy” label and the original blue color. I bet the original paint job has been in horrible condition, since the new white is very thick and matte in finish. But the “Made in” label is just beautiful. Don’t know if the early seventies were simpler times. At least the typeface and fonts made by hand in preproduction of the prints make me feel warm and fuzzy. Nope. This is not a statement about the tone, just for print used by european silk screeners of that day. 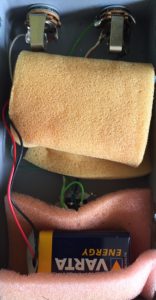 Next up was to remove the bottom plate to see what’s in there. The circuit and the battery both have their original foam pads in tact. At first test run, the switch did indeed leave contacts out. Only about 2 of 50 presses resulted in proper switching. I gave up on the original and replaced it with 2PDT standard true bypass. I saw no point in wiring the new switch per the original, as the switch had four poles, only two of them used and still the input of the circuit was connected all the time. Next up was to check out the circuit itself. Yup. I paid way too much for this unit in the trade. 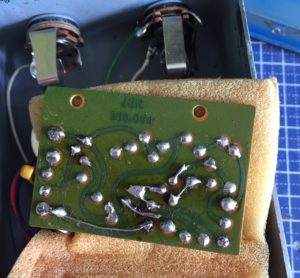 Well. Some you win, some you lose. This was perfect example of the latter. The fixes for the broken board strips are for the faint hearted. But since it works and the traces are bad, i left is as it was. Sure i could have made it prettier with any other repair method than soldering bare resistor legs over the original strip between the joints. Sure it works. But since it’s all about that 70’s piercing silicon fuzz with notable mushroom cloud factor, i saw little point in tampering with the fixes. After all, the value of the pedal in this condition is less than the parts for a proper clone and repairing it further would probably not make it any better. Ugly fix. I wouldn’t have done it this way myself. Now, for the more interesting part.. 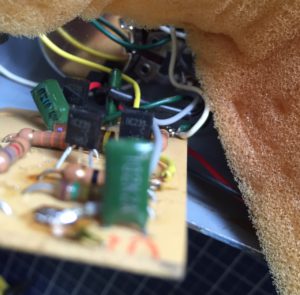 Component side of the board shows BC239C transistors, basic carbon film resistors and green mylar caps with a few diodes thrown in. And luckily there is a approximate schematic up at Fuzz Central. By the schematic alone i can take a guess how this will sound. And since it’s loosely based on the Tonebender family, i can suggest one or two mods for the circuit just by looking at it. First, which isn’t the best option, would be to up all three 10n caps to something like 100n to let more of the lower frequencies through. This method has a few downsides, one being too much gain which leads to hard audible oscillation. So i wouldn’t recommend it. Instead, i’d suggest anyone owning one not in museum grade condition to add one more 10n cap from input to ground. This will dump a part of the highest frequencies to ground and it’ll let the circuit do it’s magic in a nice sounding manner. So…

How does it sound?
As a stock unit, run with a full battery and modern guitar humbuckers – horrible. Screeching and horribly piercing highs. Think of a maxed controls of a Fuzz Face with a Screaming Bird in front of it and at the end of it, a hard clipping diodes ala Rat. Oh. That’s basically exactly what the circuit is, so imagining it shouldn’t be all tha hard. Strong, piercing, but rather unusable would be how i’d describe the tone. But once we mod it slightly and add the 10n cap from input to ground, the sound clears up, the oscillations are gone and the pedals starts to play along nicely with the guitar controls.

Without mods and assuming there weren’t any to begin with, the Jen III Fuzz and the OEM versions of the same unit are next to unusable as they are. With a very simple addition of one capacitor will make it very nice and powerful sounding fuzz unit. These will never stand up against modern requirements what we want and need from pedals. But instead, these will serve their purpose as collectibles and niché specialities for me and every other tone freak out there.

Sadly, muy unit had zero collector value when it arrived. But i still find it interesting enough to keep.