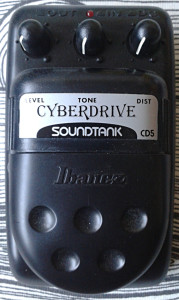 What is it?
Ibanez CD5 Cyberdrive, fixed wah distortion from later Soundtank series. Made in taiwan late 90’s.

Ok. I’ve said this before. There’s one sub-genre of distortions that just isn’t for me. This being the fixed wah distortion. And here’s the Ibanez’ take on one with modern, dull traces and nothing earth shattering. Well. Not completely like that. There are couple of interesting things in there. That won’t mean that the unit is anything more than piece of unusable junk, but those couple of pointers are good to know before throwing your 15 year old birthday gift away. You won’t be in for a bucketful of cash, but just don’t throw it away yet.

Funny how this and my Dano Grilled Cheese are the two units in perfect condition. Both are quite old units, but it seems like neither of them has seen any real use since they were bought from music stores years ago. 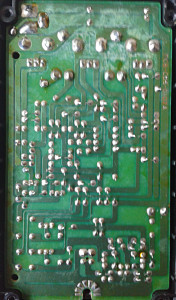 Once i opened the bottom plate, the feeling of “meh” was overwhelming. To my eyes, this is the ugliest board in the whole series. But now that we got most of the trash talking out of the way, we can dig in and see what we’ll find. Dirk Hendrik has drawn a schematic, so take a look at it next. Now. You can see the red LEDs for clippers and that the main gain stage is sort of like a Rat/TS hybrid. Those LEDs are in feedback loop of an non-inverting amplifier and the gain setting components at the inverting input are creating two frequency/gain networks alá Rat. The distortion side is quite simple but still appealing, even there’s nothing special about that. 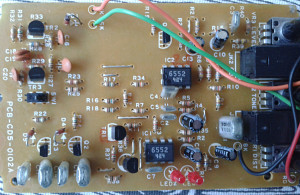 Some of you may have noticed that the input buffer splits the signal and passes it to tone “tone” control driven by another dual opamp. That topology reminds me of something. Now where have i seen that before.. Here. So you have a decent distortion and a tone control that is in fact 1:1 with Ibanez WH10 (and WH10v2) Wah pedal.

Now you know what it’s made of. It is a curiosity. Quite unusable one, but still a curiosity. One could take a wah enclosure and mount the board inside and probably even make it switchable with standalone WH10 circuit. Would make pretty cool high gain distortion wah.

How does it sound?
Engineers have been after something new and this is the result. It sounds like a high gain distortion and a inductorless wah in fixed position. That’s what it is and that’s what it sound like. Sad that we can’t separate the two. The distortion by itself wouldn’t be bad and the wah by itself isn’t bad – we know this from playing around with the reissued WH10v2. But these two combined.. No. I could see myself using this pedal in a studio, if i was to record some thrash- or mathmetal solos. But there’s not much chance of that happening, so the unit will probably stay in the cabinet with all my other Soundtanks.

Suitable for hair metal of the late 80’s and early 90’s. For anything else? There are other pedals.