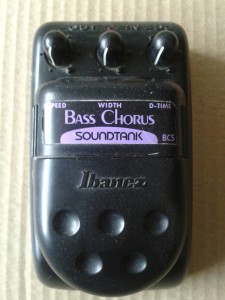 What is it?
Ibanez BC5 Bass Chorus from Soundtank series, made in japan in mid-to-late nineties. Serial number is in millions, so it’s safe to assume this is late 90’s unit.

To me it seems like the bass effects are mainly distortions, autowahs and lots of choruses. Bassists are left out on many things as most of the pedals are intended to be used with a guitar. For some reason almost every brand that sells guitar choruses also sell bass choruses. The difference between the two? Mostly just a cap job to let more of the lower frequencies through. There are couple of pedals in Soundtank series that are like broters and sisters. Reverse the colours on the top label and swap couple of caps. That’s it. 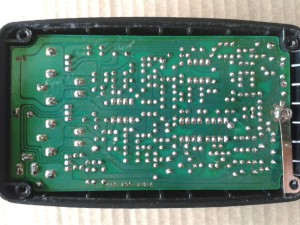 Take a look at the board. It clearly has CS5 marked on the solder side. Although the board doesn’t look like the board on CS5 (that i covered very recently), it is the same board. The picture below shows that Maxon used the same boards for both units and replaced the label with a sticker – as seen on Soundtank SF5/FZ5 (that i covered a lot earlier). The components used are different. Where my specimen of CS5 has 1/8W resistors mounted axially, the newer board labelled BC5 has 1/4W resistors. The traces do not look alike. Those look much more modern on this unit, which makes me think that this is just newer unit than my CS5. 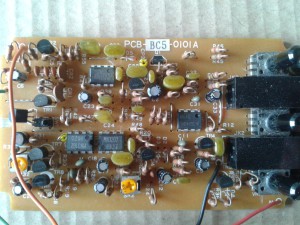 Topologically BC5 and CS5 are the same circuit. Some of the values may be altered, but i couldn’t find a schematic to confirm. And yes. I’m just too lazy to check this units component values against CS5. May it be whatever. These are well built units with lots of user value left in them. Swap the switch and you’re good to go.

How does it sound?
If there is any difference between BC5 and CS5, you’ll need to focus if you want to hear it. In fact i placed both pedals on my desk, tuned the delay time, width and speed to match each other and played away. Pressed both switches at the same time with indicator lights not visible to me. One out of every three times i guessed wrong which unit was active. The bass version sounds probably a hint thicker and fatter, but that’s it. The units are basically identical. So this might even be better for guitarists who want the fat with their cold , haunting gothic chorused guitar leads.

7 thoughts on “Ibanez BC5 Bass Chorus”